Like you, we’re passionate about pocket knives here at Knife Informer. Of course, choosing the right knife typically depends on what you intend to use it for.  Our recommendations would be different depending on whether it was generally going to be used for camping, fishing, self-defense or simply peeling fruit!  In most cases we pick our knives to suit the job at hand.  However, there comes a time when you just want a pocket knife that is jaw-droppingly beautiful, sexy and something to make your friends green with envy.   Yes, I’m talking about the coolest pocket knives on the planet.  So, without further ado, here is our guide to everything need to know about pocket knives that are simply cool.

Our picks for the coolest pocket knives

One thing is clear – Boker makes some simply stunning knives with completely extraordinary designs.  The Boker Plus Subcom has an intriguing design and some impressive specs.  It’s only 2.6 inches long when closed and has an AUS-8 stainless steel blade which is partially serrated and just shy of two inches in length.  The whole thing weighs only about two and a half ounces so most of the time you won’t know you’re even carrying it.  The quality is outstanding and you won’t see any wobble on the blade when locked in place.

We love this little masterpiece because it’s the perfect concealed knife which doesn’t disappoint when it comes to performance.  My full review here. Oh, and it comes in a plain blade titanium model too!  See it at Amazon.

Custom Knife Factory, or CKF, is a high quality knife outfit from Russia known for some outstanding designs.  The Decepticon series is probably the stand out of the crowd, designed by Alexey Konygin, an up-and-coming creative talent responsible for the original Decepticon back in 2012 that’s now been superseded by a second and third variant.  This is a large folding knife, with its 4.3″ blade in jaw dropping S35VN steel and despite the skeletonized handle it weighs in over 6 ounces.  See my full review of the recent Decepticon 3 here.

While the modified drop point blade is beautiful, what makes this knife super cool is the handle made from carefully sculpted titanium.  It all holds surprisingly comfortable in the hand thanks to intelligent design and careful chamfering.  What’s perhaps the coolest knife on this page also commands a hefty premium in price…at about $535 for the DCPT-3.

Chinese high-end knife outfit Rike has been churning out some mesmerizing knife designs in the US market lately and the Thor series is no exception.  Our favorite, the Thor 3, is the epitome of contemporary design which balances jaw-dropping aesthetics with top shelf performance and materials.  The Thor is an integral frame lock design, meaning the handle is constructed from a single piece of metal (titanium in this case) and blends seamlessly with the 3.75″ blade in glorious M390 steel.  We reviewed it in full here.

If you want a high end folding knife with boatloads of character then check out the Thor series from Rike.

Want a knife that fits in your wallet?  The SOG Access Card 2.0 is a fascinating design that resembles something James Bond would carry. When closed it’s about three and a half inches long and weighs in at under two ounces.  The VG-10 stainless steel blade is less than three inches long and less than 0.1 inches thick.   It utilizes SOG’s Arc–Lock which allows for ambidextrous deployment and a tremendously strong locking mechanism.

The included pocket clip can be used to hold your loose stash of $100 bills or platinum credit cards (yeah right!).  Sure, this is not the sturdiest knife out there but it’s damn cool looking and makes a great gift.

As part of their Magnum line, Boker has created an affordable yet eye-catching pocket knife in the Bulldog.  The naming is appropriate – this one is solid, chunky and reliable just like the dog!  It carries a 440C stainless steel blade about three and a quarter inches long and overall the knife is about four and half inches long when closed.

It’s a little heavy at just over six ounces but feels downright sturdy in your hand.  The handle is pretty nice too – it’s textured G-10 which offers an effective grip and is pleasing on the eye.  The Magnum Bulldog is a real workhorse but sexy enough to impress the ladies and your knife collecting buddies with its good looks.  What’s more it’s a real bargain at usually under $20 online! See it at Amazon. 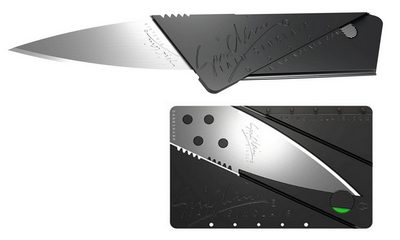 Okay, time for another credit card style knife and this time the Cardsharp2 designed by British designer Iain Sinclair.  This baby weighs less than one ounce and carries a razor sharp blade which is less than 0.1 inches thick.  It opens up using an intelligent folding operation and folds back easily for storage in your wallet, pocket or purse.

Now, let’s get something straight – you’re not going to be cutting down trees or carving a spear with this one.  In fact, you won’t even be dicing onions or tomatoes.  So what will you be doing with something so elegant and cool looking?  Well, you’ll typically be showing it off at parties and impressing your gadget-freak friends with it.  It’s not expensive (and even some would say “cheap”) so we believe it’s worth picking up even if you only get to ‘whip-it-out’ once every now and again.

When talking about cool pocket knives the name CRKT usually comes up in conversation.  With the award winning Van Hoy Snap Lock folding knife Columbia River Knife and Tool has created something rather special.  It was designed by Ed Van Hoy who invented an ambidextrous cam locking system allowing swift one-handed deployment.

The entire knife consists of AUS 4 steel and the two and a half inch blade has a subtle drop point shape.  It weighs only 2.7 ounces and is about four and a quarter inches long when closed.  Now, we agree the design is far from conventional and it may take some getting used to but when you do it’s rather fun.  In fact, that’s part of the intrigue – you will chuckle as your friends become frustrated as they try to open it.  A gimmick?  Perhaps…but here we are talking about cool knives and this is right in that category.  The quality is reasonable and really quite impressive considering the low price point.  You want something unusual?…give it a try.

Mcusta is a Japanese manufacturer that creates some of the finest production knives in the world.  They typically blend Japanese and Western elements and produce knives that are stunning to look at but also very functional.  The Damascus at first glance looks somewhat standard, even perhaps ‘ordinary’ but once you spend some quality time with this knife and get to know it you begin to understand it’s subtle beauty and form.

In terms of specs it’s four and a quarter inches long when closed and has a VG-10 stainless steel blade that is a little over three inches long.  The handle is exotic wood and overall the workmanship is simply outstanding.  This is more at home in a fine art gallery than a knife store.  Something you should consider gifting to your favorite family member or loved one.  It will be cherished and admired for years.

Another Boker?!  Yes, we know we are a little partial to Boker here at Knife Informer but you cannot fault their eye-catching designs.  In the Albatros we see a precision cutting tool with simple lines and understated elegance.  The VG-10 steel blade is two and a half inches long and overall the knife is just under four inches long when closed.  The titanium handle blends well with the blade and feels solid and sturdy in the hand.

Many use this as their EDC knife – it’s amazingly practical and effective yet retains an image that screams “yes, I work hard but look good while doing it”.  It also includes a titanium pocket clip that can be reversed for carrying tip-up or tip-down and a lanyard hole.  Sure, a little pricier than many similar sized offerings but well worth the money in our opinion. 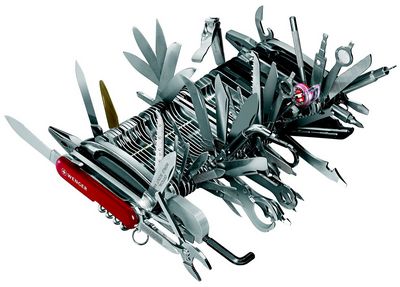 Finally, the mother of all cool pocket knives that is simply unrivaled and freaking enormous – the Wenger Giant.  When you have a pocket knife that makes it into the Guinness Book of World Records you know it’s already something special.  This bad boy has 87 implements; 147 different functions and weighs in at a whopping two pounds!  Yes, this knife would make even MacGyver jealous.  Some of the craziest implements include a telescopic pointer (for presentations at the campground?), a tire tread gauge, a club face cleaner and of course you get a standard 2.5 inch stainless blade with partial serration.  Why didn’t they go the whole hog and include a golf club or fishing rod?!

Oh and get the price…almost $1,500!  Yes, yes, we know…this is not the kind of knife you buy for your nephew’s first cub-scout outing or even consider buying at all unless you’re the most avid collector or perhaps a billionaire eccentric.  Still, it’s fascinating that Wenger have produced this beauty and they do sell judging by the reviews on Amazon.  In any case, you cannot deny the Wenger Giant is pretty damn cool. See it at Amazon.

What are you waiting for?

You’ve read our guide to the coolest pocket knives…now go out and grab one for your collection!  As always, we welcome your feedback.