Okay knife fans, today I’m reviewing something a little different than your standard EDC folder.  I’m always on the lookout for cool alternatives to the more typical knife designs and this week I came across the Boker Plus Subcom.  Sure, it’s a sexy looking knife but how does it stack up?

Buy @ AmazonBuy @ BladeHQ
Boker Knives (known as the Tree Brand) dates back to the early 1800s in Germany, where Hermann and Robert Boeker began producing sabers. The Boker name came to the United States in the mid-1800s, and distributed knives for almost a hundred years in the States until World War II when the main factory in Solingen burned down. Soon after the war, business began again for Boker, and the company changed hands several times until it was eventually sold to Cooper Industries. In 1983, Cooper discontinued its knife production but Boker USA was reborn in Denver, Colorado in 1986.  Today Boker produces knives out of facilities in Germany, Argentina and China.

Boker’s Plus lineup is manufactured primarily in China or Taiwan.  Of course we always want to support US-made blades where possible but in today’s global marketplace it’s not unusual for the big brands to have knives coming out of China.  I usually pay close attention to the build quality of these Chinese-made knives and have been generally happy with the Boker Plus in this respect.  Rest assured these are well-made knives.

The Subcom Folder has been one of the keystones of the Boker Plus lineup, serving as one of the most popular designs from Boker.

I found that Amazon carries most of the Subcom models at decent prices with fast shipping too.

The Boker Plus Subcom comes in a variety of flavors to suit all tastes as shown below: 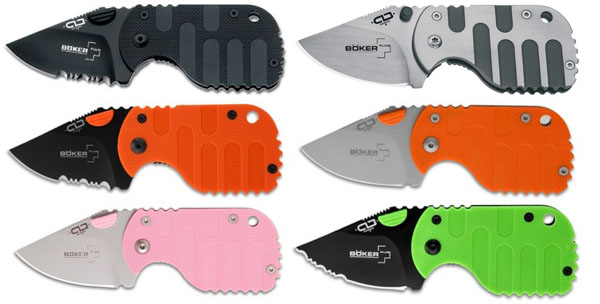 The model I’m reviewing today is the Boker Plus Subcom Titan, a special edition issued as a tribute to the knife’s original designer, Chad Los Banos.   Hawaiian designer Los Banos has been responsible for many of Boker’s designs over the years and I really like his work. The Boker Subcom Titan features a 1-7/8” blade, one of the shortest blades I’ve seen, and an overall length of around 4-1/2”. Weighing in at under 2 ounces, the Subcom Titan is a tiny little thing, barely taking up any space in my pocket and all but disappearing until I need it. 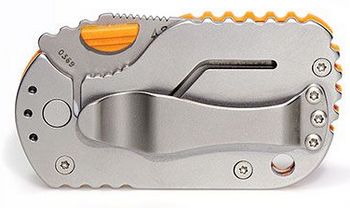 Boker Plus manufactures the Subcom Titan with 440C stainless steel. 440C stainless is a high carbon chromium stainless steel, which sits just above mid-range in the blade-steel spectrum, with high hardness and good resistance to wear and abrasion. It’s also highly resistant to corrosion, which makes the steel an excellent choice for mid-range EDC knives.

The blade is a hollow ground drop point design, with an interesting shape because of its extreme shortness. The blade has no serration on the Titanium model, but does have some excellent jimping on the top of the blade. A fingerhole at the bottom of the blade makes for an excellent grip on what might otherwise be a difficult knife to hold, owing to its extremely compact size.

The blade wasn’t very sharp out of the box, but I was able to sharpen it to a razor-sharp edge fairly easily. The 440C stainless holds the edge reasonably well, so I’ve only had to sharpen the knife once a month if I use the it regularly. 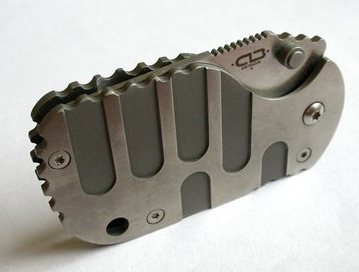 The Subcom Titan has a very elegant-looking two-tone titanium scales (CNC milled no less!) with bead-blasted and fine satin finished parts. At least, out of the box it looks elegant. Unfortunately, I found the titanium scales scratch up very easily, and mine looked like it was several years old after just a week in my pocket.

The handle on the Subcom Titan does not provide a liner (the regular Subcom F has a stainless steel liner, but the Titan lacks this liner), and I found the blade sits awkwardly off-center when the knife is closed. I haven’t noticed that impeding the safe use of the knife, though, and the knife still deploys from the handle without rubbing or dragging along the inside of the handle.

The knife is so small that you will only get, at most, a three-finger grip on the knife. I must say it took some getting used to the feel in my hands and the ergonomics are far from ideal.  Even so, it felt good enough in my hand for light- to medium-duty work.

The Titan sports metal thumbstuds which can be used pretty effectively.  Deployment of the knife is smooth, but quick deployment took me a bit of practice to find just the right way to flip on the thumb studs.

This knife features a stainless steel frame lock, which is tight enough for EDC and light use tasks. I found, though, that I was able to overcome the frame lock by applying a bit of pressure to the back of the blade with my chest, so I’m not sure I would consider the frame lock safe for all but the lightest of duty.

The Boker Plus Subcom Titan does have an excellent titanium pocket clip. The pocket clip is well made and sturdy, and does not bend out of shape easily. I find it works equally well as a pocket clip and as a money clip, which is nice for when I’m carrying cash in my gym shorts (or any other time I’m carrying the knife). The knife has holes drilled for either tip up or tip down carry, but there are no holes on the other side of the knife to make carry truly ambidextrous. 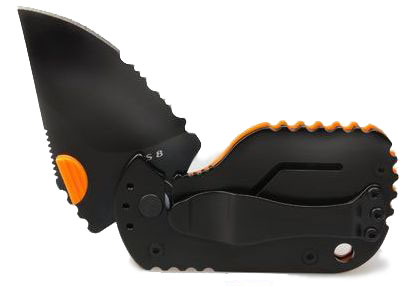 In addition to the pocket clip, the Subcom Titan also has a handy lanyard hole. This is a great addition if you are going to throw the knife in your bag or pocket with the pocket clip removed, since it allows you to put a nice paracord lanyard on your knife for easy retrieval.

While this sure is a tiny knife, the width of the handle and blade makes it fairly sturdy. I wouldn’t try using the knife for heavy duty tasks, simply because it is so small and the jimping on the handle will eat into the palm of your hand if you exert too much pressure, but the knife is sturdy enough for whittling and light prying, as well as your normal routine of slicing and dicing whatever comes your way (as long as it’s under 2”!) 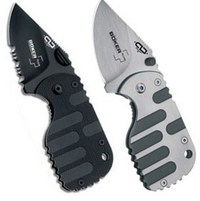 First, I have a marginal preference for the 440C steel over the AUS-8 used on the Subcom F.  I put both steels in the same general category but lean towards the 440C as it has slightly better edge retention.

Second, I prefer the titanium handle versus the FRN on the Subcom F.  In addition, the Subcom F comes with half moon-shaped thumb studs which look nice and allow for some decent leverage but these thumb studs are plastic and can break off if you apply too much pressure on them.

In support of the Subcom F, I do like the fact that it sports a stainless steel liner (none on the Titan) but this adds a little to the weight of the knife (almost 2.5 oz in total).  I also like the color variety of the Subcom F line, particularly the Subcom Dusk which is particularly striking in black and orange.    I personally prefer the frame lock version but note you can get most models with a non-locking slip joint instead.

Here’s a handy video comparison by Dan over at BladeReviews:

The Subcom Titan is a very nice compact EDC for light tasks.  It’s a solid backup knife or even money-clip and generally comes in handy when I need something smaller and lighter than my usual selections. The blade sharpens to a very nice razor’s edge, and is terrific for slicing small items like rope or cherry tomatoes.  They say that you get what you pay for, but I’d say that with the Boker Plus Subcom you get a bit more than you pay for.  At around $35 this is excellent value for money.  The Subcom isn’t a game-changer in the industry, and may not supplant a knife like the Spyderco Dragonfly in terms of being the best compact EDC knife out there, but for the money you can’t go far wrong.

While not the most practical knife, the Boker Plus Subcom serves as a stylish, compact EDC at a low price.