After my love affair with the Skyline and Leek I felt it was time to check out another of Kershaw’s EDC offerings.  Enter the Kershaw Scallion model 1620, another specimen by award-winning knife designer Ken Onion.

Now owned by Kai USA Ltd, Kershaw was founded back in 1974 and has been designing and manufacturing knives and tools ever since.  Master knife designer Ken Onion has led the charge for Kershaw in recent years to make some of the finest knives on the market. Kershaw’s Ken Onion line consists of (in increasing order of size) the Chive, Scallion, Leek and Shallot.  The Scallion is not an expensive knife by any means but how does it stand up to the reputation Kershaw has earned from its more expensive knives?

In general this is a relatively small EDC.  The folding Scallion’s blade is 2.3 inches long – smaller than the Leek at 3.0 inches but longer than the Chive’s tiny 1.7 inch blade. The knife measures 3.5 inches closed, 5.75 inches overall, and the standard aluminum handle version weighs in at 2.5 ounces.  I’d certainly put this in the compact EDC category – it’s slim and lightweight but I typically like my EDC’s to have a blade of at least 2.5 inches.  Still, it’s nice to have variety in the marketplace.

The Kershaw Scallion has a high, hollow grind blade forged from 420HC stainless steel.  I categorize 420HC in the “lower mid-range” bucket alongside steels like 440A and 13C26.  On the plus side, 420HC offers great corrosion resistance and is super easy to sharpen (aside from the hassles introduced by the recurve described below).

Thank the heavens that it’s easy to sharpen because trust me, you’ll be sharpening a lot.  For general EDC use, Kershaw’s 420HC steel simply doesn’t stay sharp for long enough.  This is not bargain basement steel but a long way off the performance exhibited by steels like S30V, VG-10 and even 14C28N which isn’t even all that more expensive.

The Scallion features a gently sloping, modified drop point blade with a subtle recurve.  I typically find that recurves are nice to look at but add very little to the cutting ability in most situations.  In fact, I generally avoid them because any benefits obtained from cutting are far outweighed by the additional aggravation come sharpening time.  It’s just not worth it.

Note the Scallion does suffer from a very weak tip, just as I found with the Leek too.  So, be careful about using it for prying or anything else that might put pressure on the tip of the blade—it’ll snap right off.

The Scallion comes with either glass-filled nylon or a 6060-T6 anodized aluminum handle (which I’m reviewing). Both handle materials help keep this knife lightweight and strong, but note the aluminum in particular is going to be relatively slippery when you’re sweating.   I must say not a huge fan of the GFN (or polyamide).  Sure it’s strong and light but it feels a little tacky and cheap.  I’d probably stick to the aluminum if given the choice.

The Scallion features some decent jimping – you’ll find it on the thumb ramp and the finger choil.  Even so, the knife still has a tendency to get slippery when sweat comes into play. I found it fine for light to medium work, but step up to anything remotely heavier and you’re going to feel it slipping away from you.

I wasn’t in love with the ergo’s on this one.  The jimping could be a bit smoother and the clip annoyed me (see later).  It just didn’t feel as comfortable in the hand as the Leek or Skyline.

In true Kershaw style there are a boat load of styles to choose from with the Scallion.  If you’re bored with the standard satin-finished blade and black handle you can pimp out with a rainbow-colored Scallion.  Yes, both blade and handle in rainbow colors.   Oh my.

Now take note that this is an assisted opening knife with phosphor bronze bushings to let you flick it open with little effort.  One swift flick of the tiny flipper and “THWACK!” it’s ready (okay I’m exaggerating).  Kershaw’s SpeedSafe mechanism ensures it’s quick and deliberate.  Do we really need assisted opening on a knife like this?  I’ll let you decide but without doubt Kershaw knows how to market a knife.

You can also deploy using the ambidextrous thumb studs on the blade if you prefer that.  I got the hang of the flipper without any trouble and preferred that overall.

The Scallion’s steel liner lock does a fine job of keeping the blade open, since it is a very sturdy, secure design with very little blade play. Sure, I’d rather have a frame lock for more heavy duty usage but liner locks seem to be all the rage with knives like this nowadays.

While the blade deploys effortlessly, getting it to close again is another matter.  The design here is poor because there’s just not enough of the liner accessible for your thumb to push back on.  You end up having to jam the tip of your thumb into the small frame to force the liner back.  Now, contrast that to an intelligent design from Spyderco in the Tenacious whereby a portion of the handle is cutout to allow your thumb to easily engage with the liner.

Going back to my point about a frame lock – well fortunately Kershaw has made a limited edition version of the Scallion that is made with a pure stainless steel handle, allowing for a built-in frame lock as part of the handle moves into place behind the blade. It is also worth noting that the rainbow-colored Scallion is also all-stainless, and has a frame lock.

In addition to the liner lock, the Scallion also features a Tip Lock safety slider to keep the blade locked closed when folded. A safety on a knife is something that people either love or hate, and I fall into the latter category. Fortunately, the tip lock safety is easily disabled by tightening down the screw until the safety cannot move anymore. No super glue needed here.  If you love the safety feature, the major complaint you should be aware of is that the lock itself is cheap plastic and won’t last for very long.

As nice as the Scallion looks when you take it out of the box, do not count on it staying that nice for very long. The knife has a tendency to scratch up easily, so you’ll lose that “new, out of the box” look within a couple of weeks of carry. 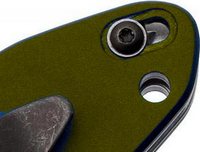 If that’s not important to you, though, the Scallion is very well suited to most EDC knife uses, as long as you don’t try doing heavy-duty work for a long time in hot weather conditions.

Like 99% of folding knives on the market today the Scallion features a sturdy pocket clip.  It’s rare for me to bash a knife because of the pocket clip but I can’t help myself in this situation.  The Scallion’s pocket clip is simply NO BUENO.  It’s far too big for this knife and only set up for right hand tip down carry.  So, if you’re a lefty or you prefer to carry tip up, you’re out of luck with the Scallion. Thankfully, there’s a nice lanyard hole at the end of the knife, though, if you carry your knife on a lanyard.

Here are some interesting alternative to the Scallion that we strongly encourage you to consider.

Kershaw Scallion Vs Leek – Okay we know the Leek’s generally a bigger knife but still worth a comparison.  Bottom line is, unless you specifically need something smaller do yourself a favor and get the Leek.  Aside from dimensions, the Leek is superior in every way and only costs a few bucks more.

Kershaw Scallion Vs Cryo – The more aggressive looking Cryo is a little larger than the Scallion but not much, and it’s sexier.  It’s assisted opening just like the Scallion but features Chinese 8Cr13MoV steel.  Sure it heavier, but about $10 cheaper too.

Kershaw Scallion Vs Spyderco Ladybug3 – Slightly shorter blade at just under 2 inches but the Ladybug3’s blade uses the massively superior VG-10 or ZDP-189 steel.  The Japanese made Ladybug3 is sturdy but ridiculously light at less than one ounce.  Costs about the same as the Scallion.

Kershaw Scallion vs Buck Vantage Small – The similarly sized Buck Vantage (small) can be had in 420HC for under $30 bucks but consider spending a bit more on the impressive S30V version that will still be sharp long, long after the Scallion gets dull.

The Scallion can be had these days for about $35, not bad considering the MSRP is closer to $70.  At this price, the Kershaw ‘Ken Onion’ Scallion is an ‘okay’ little knife but I can’t help feeling there are better choices for your money (see above).

I’m not a fan of the 420HC steel; durability is not up to par with the competition (especially the aluminum version); the tip is prone to breaking and the clip is downright annoying.   On the plus side, the Scallion is lightweight, the blade is very corrosion-resistant and there’s plenty of variety in colors and blade styles to keep everyone happy.  Oh and let’s not forget it’s American made.

Overall, this is not a terrible EDC and many of you will find it perfectly adequate.  For those of us that demand a little more, however, you’ll do well to consider the alternatives.