Choosing the best hunting knife has been a difficult task since the dawn of man.  While there is no way for us to truly know what the first hunting knife looked like, most archaeologists agree that it was probably a broken rock with a sharp edge. But, even though it was a very primitive tool by today’s standards, the discovery of this one simple tool literally changed the course of Mankind’s history.

You see, this seemingly minor discovery suddenly enabled primitive Man to cut and shape materials that were otherwise previously unavailable to him such as saplings, staves (which eventually led to spears and bows), and animal skins (which enabled him to build sophisticated temporary shelters), as well as enabling him to butcher and then preserve the meat of the game animals he harvested by drying it in the sun. So, with the discovery of this one simple tool, Man suddenly gained the ability to make suitable clothing, create ranged weapons, build temporary shelters, and preserve food; all of which greatly expanded his range and enabled him to adapt to living in some of the harshest climates on our planet.

Fortunately for us, hunting knives have remained such a vital tool in our daily lives that they too have evolved right alongside Mankind. Consequently, modern hunting knives are available in numerous different blade shapes, blade lengths, and blade materials which is good for us because certain types of hunting knives tend to be better suited for particular purposes than others. Consequently, the three most popular hunting knife blade shapes are: the Clip Point, the Drop Point, and the Trailing Point and each design has its strengths and weaknesses.

The Clip, Drop and Trailing point

For instance, the Clip Point blade shape has a straight spine with either a straight or a short, concave, drop at the end of the blade where it appears as if the spine of the knife has been “clipped” off; the purpose of which is to give the knife better balance and to position the tip of the blade below the spine, close to the center line, for greater control over the tip of the knife.  An example of the Clip Point blade is seen on the highly rated Case Folding Hunter.

On the other hand, the Trailing Point blade shape incorporates a long, concave, curve along the length of the spine which positions the tip of the blade above the spine; thus increasing the length of the sweep but lessening the amount of control the user has over the tip of the blade. Therefore, when skinning animals with loosely attached hides such as deer, elk, antelope, and sheep, I tend to prefer either a Clip Point or Drop Point blade shape because the skin of these animals is attached to the muscle with a thin membrane which is easily sliced.

Therefore, the upturned tip found on the Trailing Point blade shape, with its extended sweep, seems to work far better for this type of work than either a Clip Point or a Drop Point with their noticeably shorter sweeps. 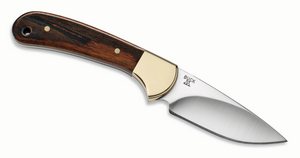 That said, because the tip of the blade on a Trailing Point is positioned above the spine, you tend to have slightly less control over it than you do with a Clip Point or a Drop Point blade shape. Thus, when performing jobs requiring fine control such as capping large game or skinning small game, the greater tip control provided by the Clip Point and Drop Point blade shapes is a highly desirable feature. 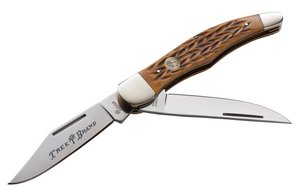 In addition, both the Clip Point and Drop Point blade shapes are far better at puncturing than a Trailing Point is and this minor difference in tip designs becomes readily apparent when you start to cut a circle around the anus in order to remove the intestines. Consequently, when hunting for feral hogs, I carry both a folding Drop Point knife for making the initial cuts around the legs and along the length of the abdomen as well as around the anus and a fixed blade Trailing Point knife for removing the hide from the carcass.

The Boker Folding Hunter is another excellent example of a Clip Point hunting knife which also carries a Trailing Point blade giving you the best of both worlds.

Another factor to consider when purchasing a hunting knife is the length of the blade. The reason that this factor is important to your decision is that, just like the shape of the blade, the length of the blade inversely affects both the knife’s reach and the amount of control you have over the knife. Consequently, a short knife blade is far easier to control with precision than a long blade is and yet, it has far less reach.

But, while a longer knife blade provides you with considerably more reach which is useful when skinning larger game animals, it also provides you less control over the knife. Therefore, most hunters compromise by purchasing a knife with a 4” blade. However, for skinning small game and for capping, knives with a 3” blade seem to be the most popular length.

On the other hand, many professional hunting guides (myself included) prefer a knife with a 5” or even a 6” blade for removing the hide from large game animals such as deer, elk, and moose because the longer blade allows us to work with our hand farther from the carcass and to reach deep into the pocket that is sometimes formed when skinning along the rib-cage.

The Boker Arbolito Timberwolf has a 5 1/4 inch blade making it big enough for larger tasks.

The right steel for the job

The third factor you should consider when selecting a hunting knife is the type of steel from which it is made. Although there are many excellent knife steels available today such as M-390,VG-10, 154CM, ATS34, 440C, D2, and O1, the most popular knife steels by far are 154CM, ATS34, and 440C amongst custom knife makers. Also, it is important to realize that knife steels are available in both stainless and non-stainless steels and that each type of knife steel has different advantages and disadvantages. For instance, M-390, VG-10, 154CM, ATS34, and 440C are all considered to be stainless steels because they each contain greater than 12.5% Chromium.

In addition, knife steels can be either very hard which enables them to hold an edge for extended periods of use or they can be very tough which enables them to withstand chipping and breaking. However, the harder a knife steel is, more prone it is to chipping or breaking and the tougher a knife steel is, the less prone it is to hold an edge. Therefore, the ultimate knife steel is one that is both hard and tough such as is achieved by laminating two layers of tough stainless steel to a hard core of VG-10 stainless steel to create what is quite possibly the ultimate knife blade.

The recommended Cold Steel Pendleton Hunter has a Rockwell hardness of around 59 which is on the higher end.

Boutique knifemaker Perkin Knives has an interesting offering in its Damascus Steel Bowie which is both beautiful and surprisingly functional.  It has all the hallmarks of a winner, full tang design, nicely balanced and accompanied by a high grade leather sheath.  What’s more, the price is more than reasonable for a blade with this kind of heft.  Give it a look.

Overall, the two most important factors in selecting the best hunting knife for any particular purpose is that it be aesthetically pleasing to you and that it feel comfortable in your hand. So, after your initial impression leads you to a knife that you really like, then consider the blade shape, the blade length, the steel from which the knife is made, as well as the overall size of the knife before making a purchase.  Also, for other views on hunting knives check out this site.

I’m going to leave you with a useful video which shares some of the truth’s about hunting knives: