Spyderco’s UK Pen Knife (or UKPK) is a slip joint folder from their SLIPIT line and designed with knife laws in the UK primarily in mind. UK law prohibits folding knives either with locking blades or blades over 3 inches. The idea here is to discourage the use of such knives in acts of violence.

Spyderco, being known for their innovative designs has created a folding knife with a blade that doesn’t fully lock but rather snaps securely open and can be done so with ease with one hand, even with gloves on. The knife can also be closed with one hand, and is held open simply by spring tension, so there is no locking mechanism.  While not for everyone, a knife like this is extremely appealing to many consumers looking for a slip joint folder.

The blade on the UKPK is 3 inches long, in a fully flat ground drop point shape.  Given the reputation Spyderco has for their unique blade shapes suiting function over form the UKPK holds true to this concept. The blade is designed with slicing and push cutting in mind, with as little resistance or wedging as possible. The blade stock is distal tapered and at its thickest is around 1/8″ thick, though the spine gets thinner rather drastically.  The tip is also surprisingly sharp.

The blade material is CTS-BD1 made by US based Carpenter Technology. While it’s one of the lower end Carpenter steels, the heat treatment is top notch and the steel performs relatively well. It takes a very fine edge and while edge retention is only so-so it hones up very easily.

CTS-BD1 has a chemical composition similar to that of 8Cr13MoV, 440B, and AUS-8, and with the right heat treatment it performs like ultra-fine carbide steels known for taking razor edges such as AEB-L and Sandvik’s 13C26.

The blade itself being as thin as it is still is thick enough to be firm and sturdy in cuts and the shape allows for very good leverage. The knife leans forward in hand, which gives a lot of relief from fatigue for the user.  It also allows for the best positioning for the hand and blade to align when making cuts, the effects of which allow for maximum cutting efficiency which also helps prevent accidental injury because the blade is not being forced into the cut with as much pressure.

I should note that the old hollow-ground GIN-1 UKPK model is now effectively discontinued.

The handle of the UKPK is made of Fiberglass Reinforced Nylon (“FRN”) and the knife is designed to have a finger choil integrated as part of both the handle and blade of the knife. The placing of the finger in this choil ensures that the knife will not close on the user while it is being put into action.

Construction consists of standard TORX screws, and for the knife being under two ounces in weight, it is extraordinarily sturdy providing ample grip with little blade play. No liners here whatsoever.  It really feels super light to the point you’ll simply forget you’re carrying it.

The UKPK comes with a ‘tip-up’ wire pocket clip which provides just enough pressure to hold the knife securely in pocket and the handle scales have just enough texture to ensure a good grip while not ripping up the pocket it is riding in.

The knife holds in hand extremely securely with the finger choil, and allows for an excellent grip even with gloves. The ‘waffle’ texturing on the FRN almost looks like G-10 at first glance and performs well.  Overall, the ergos are top notch as we’ve come to expect from Spyderco these days.

The slim profile of the knife can get a bit fatiguing when doing some heavier cutting work, but if a user buys a knife like this, chances are their EDC task list does not include extremely heavy cutting.

The UKPK utilizes Spyderco’s patented ‘Spydie Hole’ for opening of the blade but note you won’t be doing any fast flicking deployment like you can on many other Spyderco knives. A simple thumb action is preferred on the UKPK.  The blade clicks open with an authoritative snap, which helps lend confidence to the user knowing that the knife will not fall closed nor will it close when in use. 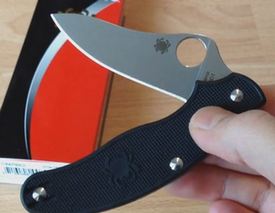 Being a slip joint folding knife the blade itself does not lock open, but remains open under spring tension. This allows the knife to be legal for carry in the United Kingdom, it poses no issue whatsoever to normal use for a basic cutting tool.

The patented opening hole Spyderco uses can be used like a thumb stud or thumb notch on other blades allowing for one handed opening.  The hole can also be used by grabbing the hole exclusively between the forefinger and thumb and snapping the blade open with a quick flick of the wrist. While this can be done, the knife has a chance of flying out of the user’s grip which can be a very dangerous endeavor, especially given how sharp Spydercos are from the factory.

When opening the blade in the conventional manner however, the movement feels very natural and smooth, in spite of having two points where the blade clicks with the tension spring on the back of the knife.

When closed, the spring leaves enough tension on the blade to ensure that under no circumstances should the blade open by mistake while riding in-pocket. Closing of the blade itself can be done in a variety of ways, either by doing the opposite motion of opening the blade using the Spydie hole or by simply pushing on the back of the blade while holding on to the handle. The ease of which this is done makes using the blade with gloved hands extremely convenient if you are not doing very heavy cutting tasks with the knife.

As with most all Spyderco knives made in their USA factory everything on the UKPK is refined and fits together extremely well. The handle scales themselves are all nicely uniform and symmetrical and the metal back-spacer meets the blade perfectly with very smooth action and secure operation.

Out of the box the knife does have a tiny bit of play to ease in opening the knife, but seeing as it is a slip joint folder a little tightening cures this easily, and does not alter how easy the knife is to open or close. The blade centering itself came near perfect right out of the box.

The jimping on the back of the blade upsweeps a bit allowing for secure holding of the knife and is relatively fine in texture while still providing ample traction. The blade finish is a beautiful satin finish with impressive uniformity and none of the grind lines are visible whatsoever.  The finish of the blade is smooth enough that it minimizes any points where moisture can gather and rust or patina can develop.

The UKPK is best suited for general EDC work like opening packages, cutting zip ties, whittling, cutting fruit up, cardboard and the like. It is a lightweight folder made primarily for lighter cutting tasks. The knife does not lock open though, so it is not suitable for piercing or hard stabbing so much without increasing the risk of the blade closing on your hand.

I found the knife performs very well but does not hold an edge for an extended period – certainly not up to par with, say a VG-10 or 154CM blade but plenty long enough to finish any given task. The best part is how easy it is to sharpen, with just a few passes on a sharpening stone the edge comes back to life providing it’s well maintained.

The CTS-BD1 blade steel provides ample rust resistance so minimal oiling and maintenance is needed given the steel’s ability to resist oxidation. If somehow the blade does manage to get some damage to it, the steel is somewhat abrasion resistant, but not so much when compared to new higher carbide super steels such as S30V, so it may take a bit of time to get some dings out, but overall it shouldn’t be too frustrating to fix right up.

Spyderco gives you a couple of blade options with the UKPK as it also comes in a leaf shaped model.  I personally prefer the drop point model based on both looks and function. I find it to be a little more versatile and like how the blade isn’t as deep which is better for tighter cuts.

Probably the closest alternatives are the Spyderco Squeak and Spy-DK. The Squeak is effectively a smaller version of the UKPK with different blade shape and steel.  The Spy-DK is effectively the UKPK modified with shorter blade and smaller Spydie hole to conform with Danish knife laws. All these are great knives in this segment so pick the one with the size that suits you best.

Assuming you’re not set on a slip joint, you may also want to consider the lock-back Spydercos with FRN handles such as the Stretch which is a similar looking knife but comes in VG-10.

Alternative offerings with slip joints are made by Case, Victorinox and others. Victorinox does make folding knives, including Swiss Army Knives which are slip joints that can be opened with one hand along with plastic handles and competitive pricing.  They are right in the same wheelhouse as the UKPK, though the UKPK by Spyderco has steel of a bit higher grade and feels more like a ‘knife guy’s’ knife.

When it comes to one hand opening slip joint folders, it would seem that Spyderco sets the standard.  Few other manufacturers are offering up a knife with a good combination of ergonomics, style, quality and tolerances with such a reasonable price tag.  I’d be extremely hard-pressed to find a knife that suitably matched all of the features of this one at the same price point.  Bravo Spyderco.