A small subset of knives today have established a strong brand and following all of their own.  These knives bear iconic designs that stand the test of time and meet tight performance tolerances set by an ever demanding user base.  The Benchmade Infidel 3300 sits firmly within this category but despite its massive fan-following the Infidel still attracts controversy.  An affordable piece of outstanding engineering or an expensive novelty?  Let’s find out.

Buy @ BladeHQ
Readers of this site will undoubtedly be familiar with Benchmade, the Oregon based knife company which has impressed us over the years with countless excellent specimens of the sharp variety.   For those unfamiliar with the Infidel, this is Benchmade’s flagship OTF (Out the Front) knife which competes in a limited market segment populated by only a handful of manufacturers.  Pennsylvania based, Microtech has been the dominant force in OTF knives for over a decade now.  Benchmade wanted a piece of the action.

You could argue whether this is primarily an offensive or defensive knife but make no mistake, the Infidel is not intended to be your EDC.   This is not for carving tent pegs, slicing tomatoes or opening your Amazon boxes.  The Infidel is aimed squarely at (i) knife enthusiasts, and (i) law enforcement/military or others in need of a knife to intimidate would-be attackers.  Yes, intimidation is the name of the game here.

Benchmade first introduced the Infidel 3300 back in 2006 and it’s made quite a splash since then.  The OTF market is a niche largely aimed at military, law enforcement or emergency medical tech’s who needed blades that could be deployed swiftly and safely.  The market segment is squeezed because of the legal restrictions imposed on these knives by many states in the US.  The Infidel is a fully automatic knife which meets the definition of both a switchblade and a dagger – terms that appear regularly in state legislature.  Make sure you review your state’s restrictions before considering this type of knife for your collection. 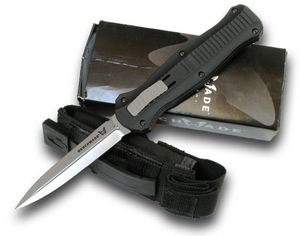 OTF knives come in either a single or double action mechanism.  With single action the blade will deploy automatically but you have to manually retract it back into the handle.  The Infidel has a double action which provides automatic two-way movement through a single button or lever.

With its launch MSRP of $450 Benchmade was clearly targeting the top end of the OTF segment and aiming directly at competitors like Microtech and Protech.

There are several different editions of the Infidel today, including single-edged models and the Mini-Infidel 3350 with a 3.1” blade. Benchmade also released two limited edition “Gold Class” Infidel OTFs, featuring Damascus steel instead of the D2 Tool steel but you’ll be hard pressed to find those models retailing today. The standard Benchmade Infidel OTF 3300 model is available with either a dual plain edge blade or a blade with BK1 tactical black-coated blade.  There’s also a partially serrated option.

I found the Infidel fit very well in my medium-sized hands.  It’s larger than your average EDC for sure but still carries a simple, elegant feel.  I can’t fault the blade to handle ratio – it’s perfect.

Benchmade opted for D2 tool steel on this double-edge spear-point dagger blade, with a chisel grind and a matte satin finish (also available in black coated).  In reading my Knife Steel Guide you’ll know that D2 tool steel is extremely durable with a fantastic ability to hold an edge. This is a high carbon steel that’s technically not a full stainless steel (though it has sufficient chromium to qualify as “semi-stainless”) but what sets it aside is the hardness.  Benchmade is able to treat this D2 to about 60-62 Rockwell.  It’s not going to lose its edge for quite some time.

Sure, it comes razor sharp out of the box but you can sleep easy knowing that this sharpness is not going to disappear anytime soon.  On the flip side, when the time eventually comes to re-sharpen you’d better cancel your weekend plans because putting an edge back onto D2 is no walk in the park.   Experts will tell you it’s not all that difficult but if you’re not a seasoned sharpener I guarantee you’ll struggle.  Patience is the key.

Because it’s a chisel grind, the blade may sometimes seem more dull than it is, and of course you sacrifice some durability of the blade by grinding so much of the steel away from the edge to attain the razor sharpness. Even so, the knife is able to pass the “shave the hair off your arm” and paper tests with ease.

A spear point like this is designed to excel at piercing and stabbing.  I must have thrust the blade into 0.25” heavy cardboard about 20-30 times repeatedly with very little resistance.  The blade came out looking just as good as when it went in.   Impressive.

The Benchmade Infidel features a black anodized, machined 6061 T-6 aluminum handle with a removable pocket clip. Benchmade has also released other handle colors, including an olive drab handle instead of the standard black handle.

Generally speaking, one of the benefits that OTF knives bring over their folding counterparts is the excellent handle grip that can be achieved and the Infidel doesn’t disappoint here.  It’s a refined balance between comfort and grip.

The handle itself is designed to be ambidextrous, with equal cutouts on both sides of the knife to make sure you can grip the knife whether you are left-handed or right-handed.  Benchmade has also flared the handle out a little at both ends which prevents the knife being pushed or pulled out of your hand during use.

It’s well designed with a pair of notches on either side of the front deployment slot to help make sure the blade does not rub against the handle if it happens to slide left or right within the handle as you are deploying or stowing the blade.

The Infidel opens via a double-action Out-the-Front auto deployment that’s an impressive feat of engineering to say the least. The switch to deploy and retract the knife is located on the back of the knife, and is easily accessible for either right-handed or left-handed users.

While not as secure as a fixed blade knife, the three-point retention system has almost no blade play and keeps the blade securely deployed until you choose to retract the knife.  Benchmade achieves such a sturdy lockup with the aid of steel liners which sit tightly on both sides of the blade.  I was weary at first but this thing is SOLID. 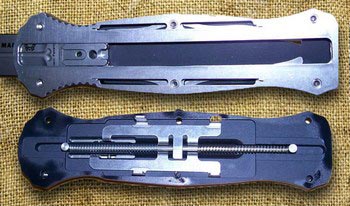 Retraction of the blade is just as easy as deployment; you just pull back on the trigger switch, and the blade quickly and efficiently retracts into the handle. I actuated the knife probably a hundred times or so during my review, and found it to be very reliable.  Zero failures.  The springs Benchmade are using here are insanely strong.

With each and every blade action it’s a chilling reminder how intimidating this knife can be.  When the powerful spring launches into action the movement is deliberate and fast.  Like a guard dog revealing its teeth the Infidel’s blade action is sending a message to anyone who’s looking for trouble.

If I had to call out any weaknesses it would be that the actuation distance of the switch is slightly unpredictable. The switch has a fair bit of play before it actually engages the deployment mechanism, so it’s unpredictable to tell where the break point is going to be on the trigger to extend or retract the blade.  It takes some force though, so I was never worried about it deploying in my pocket for example.

Let me start by being clear that the Infidel is a high end piece of equipment – well built and built to last.  The entire knife is manufactured to impressively tight tolerances and high end materials.  Of course, all that doesn’t come cheap … more on that later.

Nice to see this knife also has a cleaning port on the base of the handle which can be used to blow/wash out gunk and also add lubricant as necessary.

Overall the Infidel has an excellent finish, and it’s perfectly fit for carry in your pocket. Unlike some knives, the handle has very little texturing to rub and grind against your clothes or your hand when you reach into your pocket. The deployment switch is perfectly positioned to keep the knife safe within your pocket or in the included MOLLE sheath.  Kudos to Benchmade for not skimping anywhere with the Infidel.

Since the mid-nineties the name to beat in the automatic OTF knife space has been Microtech.  By the late-nineties ProTech came along and provided some well needed competition in producing some excellent OTF knives of their own.  Others joining the party with decent offerings include Piranha, Masters of Defense and DKW.

Here’s my take.   The top end Microtech’s are a notch above Benchmade’s Infidel but you’ll pay more and I hear their customer service is lacking.  Microtech’s Halo is arguably the best out there and the Scarab’s are also outstanding but these OTF’s go between $500-$600.  Their Makora II’s are also superb knives (longer than the Infidel at about 10.5”) and run about $450.  Protech offers the impressive Dark Angel for 1/3 of the Infidel price tag but note it’s a single action only.  The Piranha Excalibur is strikingly similar to the Infidel in price and appearance but arguably weaker in performance.

Much of it boils down to how much you’re willing to pony up for your OTF.  If money is no object (yeah right) then I’d strongly consider you check out Microtech but if like the rest of us you have a limited budget then the Infidel is an excellent choice.

EDIT: I should also point out that Benchmade showcased their new 3320 Pagan OTF at this year’s SHOT Show.  The jury is still out on this one but it doesn’t look all that inspiring to me.  Watch this space for more on the Pagan.

Without doubt the Benchmade Infidel is a top shelf offering in the OTF space with formidable performance and quality with only a couple of minor weaknesses.  It’s a joy to use and carries enough prestige to make your buddies green with envy.

Naturally you may wonder how much one has to pay to acquire this well-crafted implement.  Well, that’s when things get a little depressing because you’re looking at about $400 to take this baby home.  Wow, $400 really?!  Still,when you consider what you’re getting and notice the prices set by Microtech and others it all seems worth it.  Many will continue to rant that this is overpriced but to me it’s a bargain.

The Infidel may not be the ultimate in OTF knives today but it comes very, very close.  If you’re in the market for a knife like this then I’d absolutely recommend it if you can scrape the money together.

Simply one of the best OTF knives on the market today and from a reputable company.