Victorinox, one of the world’s best known manufacturers of pocket knives and originator of the famous “Swiss Army Knife,” was founded in 1884 by Karl Elsener.  The company’s iconic cross and shield logo dates from 1909, the year in which Elsener renamed his company “Victoria” in honor of his mother.  The company became “Victorinox” in 1921 and continues to this day as one of the world’s premier producers of folding, multi-purpose and fixed-blade knives for home, kitchen, workshop, utility and military uses.

Based in Ibach, Switzerland, today the company employs some 900 workers and produces tens of thousands of knives daily, most for export.  In 2005, the company acquired the only other authorized user of the term “Swiss Army Knife”, Wenger and is now the world’s sole producer of knives marketed under this name.

Victorinox is best known for its small, multi-purpose pocket knives.  For decades, Victorinox knives have been widely respected as useful tools for all kinds of situations, and have found their way into the hands of NASA astronauts, mountain climbers and Arctic explorers.  All of its multi-function pocket knives are known for having a variety of useful, versatile devices packed into a very compact and portable framework.  Its other single-blade folding knives are also well-regarded.

In general, despite the brand’s “household-name” status, Victorinox knives are known for featuring high quality, durable steel and solid construction, even on its compact “everyday” models with plastic housings.  The company says that their inspection and and quality control processes for all of their steel supplies help insure a top-quality product.

The company’s flagship model for many years was the famous “Champion,” a knife design considered important enough to be exhibited in the Museum of Modern Art in New York.  Since 1986 the basic Victorinox Swiss Army knife has been the improved “SwissChamp” model, considered to be perhaps the most functional Swiss Army Knife on the market.  The SwissChamp, with its familiar red exterior and white Victorinox logo, features 33 different tools in its 3.5 inch frame.

Tools include various knife blades, a saw, pliers, a corkscrew, wire cutters, a fish scaler, a bottle opener and much more.  The SwissChamp is widely used by hunters, outdoorsmen and in everyday situations as a useful, all-purpose knife.

Another well-known model is the company’s compact, ultra-portable “Classic SD.”  Essentially a scaled-down version of the SwissChamp and its predecessors, the Classic SD is a basic multi-purpose knife designed strictly for ordinary, low-impact tasks or as a backup knife.  The Classic SD features a knife blade, a file, a pair of scissors, a toothpick and a pair of tweezers, and comes with a metal ring for attaching the knife to a key-chain.  Available in a huge variety of exterior colors and and patterns, the Classic SD is one of the company’s best-sellers and a good knife for small-scale applications and everyday carrying.

Whatever the model, many of us have fond memories of holding our very first Victorinox Swiss Army Knife.  For me, as I’m sure is true for many of you, I was lucky enough to own one when I was merely a teenager, only just breaking into the world of outdoor pursuits and proud to have my own knife.  Today I still believe they make excellent starter-knives but that is not where it ends.   Many knife enthusiasts I know still carry a Victorinox each and every day due to their compact size, versatility and high quality standards.   Long live Victorinox!

Below are some great examples of Victorinox knives currently on the market:

The One Hand Trekker is different from your classic Swiss Army Knife but in our opinion one of the better models overall.  It’s a one handed multitool that includes 12 stainless-steel tools including the serrated knife blade that can be deployed using your thumb.  Hence the “one-hand” name.  You also get  a saw, Phillips screwdriver, wire stripper and can opener.  Victorinox offers a lifetime warranty which speaks highly of the level of quality you receive from their factories.

The Trekker measures just over four inches long and feels light in your pocket.  It typically costs under $50 and many vendors, like Amazon are including the Classic SD Swiss Army Knife for free! 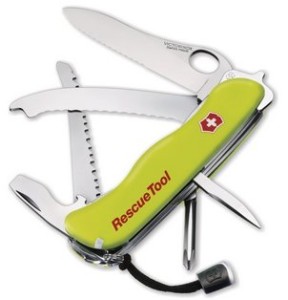 The Victorinox Rescue  Tool sits at the higher end of their product line up and really means business.  It was developed in association with rescue and safety services and won the IWA Knife of the Year award back in 2007 beating out over 70 competitors.  The production quality is second to none as the knife is subject to very strict quality control measures along the way.

The Rescue Tool features a one-handed blade like the Trekker as well as a screwdriver, window breaker, wire stripper, reamer, belt cutter, key ring, disc saw, tweezers and more.  It comes in either a black or luminescent yellow handle and complete with nylon carry cord and case.  Like this one alot! 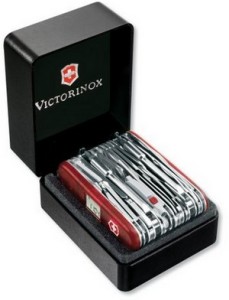 Want the ultimate Swiss Army Knife with 80 different functions crammed into a single knife?  Well, here it is!  Yes, we know…this is really only a collectors item but it’s quite amazing what Victorinox has designed here.  For around $400 bucks you get the ultimate show-off piece.  In addition to the assorted blades, scissors and screwdrivers you have come to expect from Victorniox, the SwissChamp XAVT also provides you with a digital clock, altimeter, barometer, and thermometer.

All nicely encased in a translucent red grip.  Literally everything you need and a whole lot more in a single pocket busting knife.  What’s not to like?!