Owner Jason Brous started Brous Blades relatively recently in 2010 while he was in his early 20’s.  Jason came from a CNC machining background as a result of his father (and grandfather before him) who owns a custom machining shop aimed primarily at the medical industry. Jason grew up working on the machine shop floor and soon began developing an interest in knives, realizing the endless possibilities with knife design.  As Jason developed competency in CNC machining his passion for knives and knifemaking also began to take off. 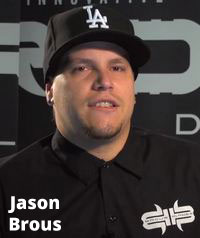 Many of Brous Blades early designs reflected a style referred to as “Bio-mechanical” art, a unique style combining elements of machines, robotics and organic features (think a cross between the Terminator and Alien).  Jason had discovered this style in his early days experimenting with tattoos.  The results drew similarities with many fantasy-style knives combined with Bio-mechanical features that drew a great deal of attention in the community.

In fact, Jason while was proud of his very first knife design but it wasn’t well received by the knife community who’s love for fantasy knives was luke warm at best.  Still, Jason continued to be heavily influenced by this Bio-mechanical style which he adored so much.

Thereafter, Brous Blades began directing focus towards clean yet functional designs while retaining the stylistic Bio-mechanic undertone attributed to Jason’s early influences.  Functionality is always prominent which set Brous aside from many of the fantasy designers who’s blades are rarely usable.

“Knifemaking is such a big passion for me because I can do something different every single time I go to the drawing board.“

From the beginning, Brous Blades targeted top-tier materials and manufacturing techniques.  These high quality knives are most often produced in limited edition batches and generally use D2 steel. Jason’s designs always begin with a simple pencil-to-paper drawing.  Nothing fancy. One thing’s for sure, Brous Blades are never cheap, never boring.

Here’s a couple of examples of Brous Blades knives that are representative of the brand’s typical style.

The original Bionic flipper was met with mixed success with many users reporting production flaws and just not the kind of quality you’d expect for a $150 knife trying to break into the market.  Brous quickly followed up with the Bionic 2.0 and I’m hearing mostly positive things from consumers but many still have reservations.  There’s no denying the unique aesthetics of this knife which fit right in with the Bio-mech theme at Brous.  As with many of Brous Blades knives it carries a D2 steel blade and the Bionic features an aluminum handle which keeps the weight down under 3 ounces.  Apparently the first EDC choice of Jason Brous himself.

Like the Bionic, the Caliber is a Liner Lock knife with D2 steel blade but this time falls on the higher end of lineup at well over $300.  The Carbon Fiber handle likely has something to do with this higher price point and it just seems on a higher level in terms of fit and finish.  The Caliber hits the sweet spot of sizing with 3-inch blade and 4-inch handle and is built on standoffs giving an open-design concept that’s easier to maintain.   Again, looks are distinctly unique and the action is amazingly swift and secure.