Today we are taking a close look at the Spyderco Manix 2 tactical folding knife.  Spyderco has produced some formidable knives over the years and my personal favorite the Paramilitary 2 is perhaps one of the best EDC’s out there.  So, how does the Manix 2 compare?  Read on…

Buy @ AmazonBuy @ BladeHQ
Spyderco, based in Golden, Colorado, has long been a leader of the US knife industry, and a strong favorite among enthusiasts and military/law-enforcement personnel.   Well known for their innovative designs, quality manufacturing and well balanced ergonomics the Company has developed a strong reputation over the last few decades.

The original Manix hit the scene back in 2004 and featured an S30V blade with G-10 handles.  The Manix 2 is the second generation of the Manix line, a rock-solid knife designed by Spyderco founder Sal Glesser’s son, Eric and and burst onto the market in 2009.  It introduced a bunch of new features the most notable of which was a unique ball bearing lock that’s performs exceptionally well (more on this later).

Many were disappointed to see Spyderco had replaced the impressive S30V steel on the original Manix with somewhat inferior 154CM on the Manix 2.  Fortunately, since 2012 Spyderco has reverted back to the excellent S30V steel as standard on the Manix 2 and as a bonus they didn’t even raise the price.

You’ll find a number of variations on the popular Manix 2.  Here are some of the options available:

You’ll find many of these variants available in the form of “sprint runs,” limited edition production runs of the Manix 2 using the different steels and coatings.  One example is Spyderco’s Manix 2 Lightweight version which has the same overall design, but with Carpenter’s CTS BD1 steel and fiberglass reinforced co-polymer handle scales.   Note some of these variants are harder to find than others.

In addition to the standard size, the Manix 2 comes in an oversized “XL” version with a blade just under four inches long.  The version I’m reviewing here is the standard model with S30V and G-10 handle.

First thing that struck me with the Spyderco Manix 2 is just how sturdy this knife is, but it comes at a price and that price is 5 ounces in weight in the standard version.  Now, you may be thinking that 5oz isn’t much but when you compare to the Paramilitary 2 at 3.75oz, the Kershaw Blur at 4.2oz and the Benchmade 940 Osborne at a featherweight 2.9oz then it’s noticeable.   That said, I’d put it within my tolerance of acceptable weight for every day carry, especially since the knife is so well made with excellent ergonomics.  Now, while this isn’t the lightest EDC knife on the market it certainly is one of the toughest.

The knife’s overall length open is 8” (4.625” closed), and the blade is 3.375” long.   It’s about the same size as the Tenacious and a bit smaller than the Paramilitary 2.  It feels really good in the hand, I mean really good.  The Paramilitary 2 is a joy to behold but this thing hugs your hand and feels like an extension of your fist. 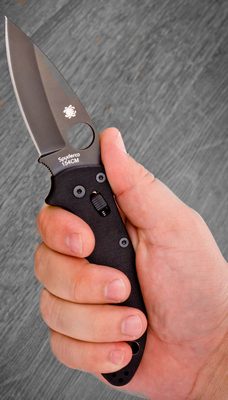 As I mentioned earlier, the blade of the Manix 2 is made Crucible CPM S30V, full flat ground with aggressive jimping and a distinctive 14mm Spyderco Round Hole for quick deployment.  You may notice pictures of the Manix 2 with a sabre grind but this was discontinued (thankfully) with the 154CM version.

Crucible CPM S30V steel, developed by Dick Barber of Crucible Materials Corporation and knifemaker Chris Reeve is extremely resistant to wear and corrosion.  The steel has evenly distributed vanadium carbides, which makes for a harder blade that cuts more effectively than blades made with chromium carbides.  This gives the steel a very refined grain that results in superb performance.

Buck Knives refers to S30V as “the absolute best blade steel available.”  Well, we all know there are better steels out there but I continue to assert that S30V steel is an outstanding choice for EDC knives and represents the sweet spot of price/performance in the upper end market.  Sharpening takes a little more effort than the lesser steels but with the noteworthy edge retention you won’t need to sharpen all that often.  I was able to reprofile the blade and it took a polish pretty well.

The full flat grind blade on the Manix 2 will work nicely for slicing and dicing almost anything you want, and the edge will hold its sharpness even long after general abuse in the field.  When I took my Manix 2 out of the box, it immediately passed my razor test, neatly shaving the hair off the underside of my arm.  I expect nothing less from Spyderco’s blades these days.

You’ll instantly recognize the leaf-shape which is common on several other Spyderco knives.  Note the tip is somewhat thin and you need to be careful prying things open with it for risk of breaking.

Spyderco’s trademark “spyder hole” thumbhole is ever present, making this knife a breeze to deploy one-handed.  Again, the blade held its edge for weeks of heavy usage, which speaks volumes for both the quality of the grind and the quality of the steel.

The locking system on the Manix 2 is somewhat unique, referred to as a “ball lock.” It operates with a spring-loaded ball bearing “caged” in polymer resin holding the blade firmly in place.  It can be a mouthful to explain how it works but trust me when I say it’s solid as a rock.  In fact, it reminds me very much of the trusted Benchmade Axis lock in design and concept.   Zero blade play here.

You can unlock the knife without placing your fingers in the way of the blade, which is a bonus for single-handed use.  The only downside to this locking mechanism is the strength of the spring—I barely have the strength to disengage the lock one-handed, so make sure you test it out for yourself if you must have full one-handed operation.  You can’t really blame Spyderco for this as they have intentionally made it stiff to prevent locking failures.  After the locking mechanism had some break-in time, it did get easier, but this could still be a concern to some of you.

The handle on my Manix 2 was G10 scales accompanied by stainless steel liners.  A pretty common combination these days with pocket knives in this class.  The scales feature nice texture in a plain matte black finish. I’d say the texturing on the G10 is medium to course but not aggressively textured.  It gives the knife an excellent grip and tactile feeling when you’re using it. 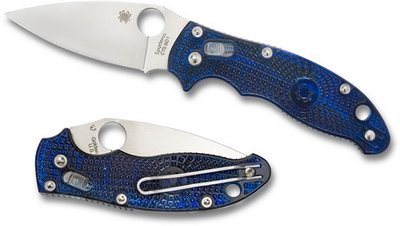 Note the liners on the standard model are not skeletonized which adds strength but at the expense of additional weight.  At the same time, solid liners mean less debris and gunk are likely to accumulate which requires extra cleaning.

The handle features two large choils, perfect for precision cutting while maintaining a comfortable grip.   There is also excellent jimping throughout the handle, thumb ramp, and the choil of the blade itself.  Your fingers are far less likely to slip around on this knife than other knives in its class.

The Manix 2 also boasts a nice-sized lanyard pipe suited for standard paracord.  The knife bears the Spyderco pocket clip, mounted fairly high on the knife for a deep carry. The pocket clip is reversible, which allows for ambidextrous tip up carry.

Many of you may be trying to compare the Manix 2 with the Paramilitary 2 so here’s my take.  The Paramilitary 2 is James Bond – stylish and sexy but supremely capable and deadly when necessary.  The Manix 2 is Rambo – tough as nails and means business but lacking a little finesse 🙂   Don’t get me wrong, both of these are top class knives and ultimately it depends on how you plan to use it.

I personally prefer the Paramilitary 2’s compression lock versus the Manix’s ball lock.  I also find the Para 2 much more fun to open and close.   Still, if I were headed into the wilderness then I may opt for the more rugged Manix 2.   My advice – buy both!

In the Manix 2, Spyderco has created an outstanding tactical pocket knife which excels in a whole host of uses.  Most notably, this is one of the toughest EDC knives I’ve used and will stand up to all kinds of abuse.   Finding a US-made EDC knife with S30V steel and a state-of-the-art locking mechanism under $100 represents great value for money.  Call me a Spyderco fanboy but the team from Golden, Colorado has done it again.

Strength and style at an affordable price - Spyderco has done it again with the Manix 2.