It’s no surprise that Spyderco is one of our favorite brands.  The Colorado based company continues to demonstrate a dedication to high quality and innovation by designing folding knives that strike an acute balance between high performance and practicality.   Still, not everything that leaves the Spyderco factory is perfect but every now and they produce a real winner.

Buy @ AmazonBuy @ BladeHQ
I tend to look at a whole bunch of factors when deciding whether a pocket knife meets the gold standard.  It has to be more than just sharp. As you move to the higher end offerings there is one particular knife that is talked about a great deal in the community and it’s gathered a staunch following over the years.  Of course, I’m talking about the coveted Spyderco Paramilitary 2.

I felt like a solid review of the ParaMilitary 2 was warranted because I’m often asked whether this knife lives up to the hype and is it worth the money?  Also, I often get asked why this particular pocket knife is so damn popular?  Well, I’ll attempt to explain that throughout the review.  So, let’s get into it.

As you may have guessed, the ParaMilitary 2 is the successor to the original ParaMilitary which first debuted in 2004.  The ParaMilitary came about primarily as critics complained about the overwhelming size of the otherwise highly regarded Military pocket knife.  So, Spyderco released the ParaMilitary as a mid-sized version at two thirds the size of the Military.  It had a top quality S30V blade which extended just over 3 inches long and accompanied by a G-10 handle with a first rate compression lock.  The ParaMilitary really was at the top of its class for a mid-size survival knife.

So why the need for the ParaMilitary 2?  Well, Spyderco is one of the few companies that continually strives to better itself and outperform on a regular basis.  It rarely chooses to sit on its laurels and wait to be outshone by a competitor before bringing something new to market.  The experts at Spyderco loved the ParaMilitary but knew they could do better and hence the ParaMilitary2 was born in 2010.

Below is a summary of the key changes made to the original ParaMilitary.

As you can see the differences are subtle but in aggregate they make for much improved performance and simply a better knife all round.  Let’s get into some of the details… 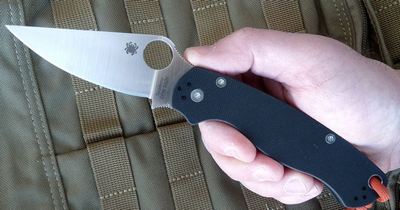 The Spyderco ParaMilitary 2 is a mid-sized EDC (slightly on the larger end) measuring around 8.3 inches in total.  It has a premium full flat ground plain edge blade which is manufactured with the remarkable S30V steel as standard.   The blade measures about 3.4 inches in length with a cutting edge of just over 3 inches.  I measured the blade to be about 0.15 inches thick.   The handle is made of the ever popular G-10 material and measures around 4.8 inches long.  It’s about half an inch thick and comes with stainless steel liners that are skeletonized.  Retail price is about $120 which I’ve come to realize is somewhat of a bargain for this baby.

The ParaMilitary 2 is not particularly heavy for its size at 3.75 ounces.  It feels tremendously stable and firm in the hand as you tend to expect from Spydie’s these days.  The trademark Spyderco thumb hole is unusually large and a joy to use.  The locking mechanism is a compression lock which I’ll touch on a little more later but overall works exceedingly well.  The pocket clip is 4-way adjustable so you have the best of all worlds.

The design of the US made ParaMilitary 2 is really what sets it aside from the competition in my opinion.   The original ParaMilitary was an excellent knife but this one is a real step up.  Everything about this knife screams Spyderco from the moment you see it to when you perform your first cut.  By that I mean it’s quality.  You rarely see ergonomics work as well as this on a pocket knife.  It’s tough to describe but everything about it just feels right.

The Spydie hole is larger than normal and permits opening with gloves.  The G-10 handle has just enough scaling to resist slipping without feeling uncomfortable.  It’s for sure a larger EDC but you’re able to use it with the same maneuverability you have with a much smaller knife.  Pick one up and you’ll know what I mean.

Overall fit and finish is excellent.   Everything was tightly manufactured and I saw little to no “factory mishaps”.  The blade is a real work of art.  It’s basically a clip point (or some say saber style) with an extra long and pointed tip.  Sure, it’s relatively big but the knife means business and you’ll find that length comes in handy more often than not.

The steel is one of my favorites on higher end knives – CPM-S30V.  I assume most of you know what this is but if not just trust me when I say it’s damn good.  The S30V performs very well indeed and arrived razor sharp as you’d expect.  I’m consistently astounded at how sharp Spyderco is able to get its factory production knives to be.  S30V is a relatively hard steel (though I notice this version is not as hard as I’ve seen on other knives) and will maintain its edge far longer than most all of your ‘cheaper’ knives I assure you.  Yes it’s a little bit of a challenge to re-sharpen to the uninitiated but well worth it in the end.  Read more about CPM-S30V and other steels in my essential knife steel guide.

It’s also worth noting that the Paramilitary 2 is now available in the formidable CPM-S110V steel, with off -the-charts edge retention performance.

I found the blade to be super effective at a multitude of cuts – slicing, stabbing, thrusting, chopping, you name it.  The blade is ground very flat and to great effect.  It has more of a belly than other Spyderco offerings such as the Delica.  At first I was a little concerned that the tip seemed a little too thin, but after using it extensively and  since I tend not to use my knives to pry things open then it wasn’t an issue and I actually welcomed the design.

Opening and closing is very impressive.   It’s almost like it operates like an assisted opening knife – so easy, so smooth.  The new bushing pivot system on the ParaMilitary 2 is nothing but high end and results in a sweet gliding motion that you wish all your knives had.

In speaking of the compression lock I was again very impressed.  When it’s locked up this thing is solid, I mean rock solid.   This type of lock should never fail under normal use.  Technically the only reason it would fail is if the blade tang would crush the locking tab that fits within the slot in the tang. It’s really not possible under even the most extreme conditions.  Imagine combining the liner lock of your Tenacious with the Axis lock of your Griptilian and you sort of have an idea of what’s involved here.  In fact I’d put it in the same category as the locking system found on the Sebenza.   A word of warning though – if your hands are on the larger side you may encounter the possibility of the lock pinching your palm.  It’s not been a problem for me but a couple of buddies mentioned that to me.  Still, easy to use, reliable, durable and extremely resistant to all kinds of abuse.  Perfection.

In rounding off the rest of the details I find the lanyard hole to be very useful in that’s it’s a little bigger than normal and will take two lengths of 550 paracord easily.  After many months of use I’m still super happy.  I’ve had the blade deep in all kinds of “gunk” and find it real easy to clean with regular soap and water.  After numerous cleanings like this the deployment action is still like it was when I first took it out of the box.  It’s really built to last.

I personally like the digital camouflage look with the black blade.  You will also see a number of limited edition varieties such as with blue handle and M390 steel.  Unfortunately even with all these varieties the sad truth is that the Spyderco ParaMilitary 2 is frustratingly hard to come by these days.  You’ll typically find most retailers are out of stock.  Bummer I know.

Spyderco Paramilitary 2 vs Manix 2 (Amazon): I find the Manix 2 equally comfortable in my hand compared to the PM2.  The Manix 2 comes with more jimping so provides a little more traction.   Also, the PM2’s pocket clip has four mounting positions versus only two on the Manix.  Where the PM2 excels is the compression lock which is perhaps the best out there and superior to the Manix 2’s ball lock in my opinion. I also find it easier to open/close the Paramilitary 2 with one hand.

Spyderco Paramilitary 2 vs Benchmade Griptilian (Amazon): It’s no secret the Griptilian is one of my favorites but overall the PM2 is simply a better knife.  You’ll pay for it though, at roughly 1.5x the price.  The Griptilian is comfortable but it feels totally different in your hands versus the PM2. The Grip fills your hand a little more but feels far more plasticky which can put some people off.  The PM2 has superior steel (S30V vs 154CM) and while the Benchmade AXIS lock is excellent it’s sub-par against the PM2’s compression lock.  Again, the PM2 wins overall here but perhaps not a fair match given the price difference.

Spyderco Paramilitary 2 vs Benchmade 940 (Amazon): Wow this is tough.  Both formidable EDC’s but I give a slight edge to the PM2.  The 940 is super light and thin in your pocket.  It’s stainless steel handle won’t rip up your jeans as much as the PM2’s G-10 but at the sacrifice of far less grip.  The PM2’s blade is better at cutting given the flat grind and extra belly versus the 940.  Consider the 940 as a high performance gentleman’s knife whereas the PM2 is more of a tactical warrior.

To wrap up, for what you’re getting I find that the ParaMilitary 2 is easily one of the best value knives out there.  This is clearly evidenced by the fact they these knives are often sold out and really quite hard to come by.  Seriously people, if you see this knife on sale at your favorite online retailer (I check Amazon regularly) then you should consider grabbing it.  If you just happen to see it for under $120 then don’t even think – just buy!

One of the finest mid-sized EDC knives available today. Top notch quality and performance. If you can afford it, buy it.  If you can't, buy it anyway.