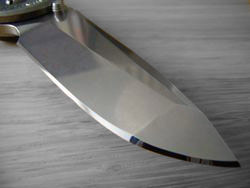 Knives are a common fixture in our everyday lives, be it in the kitchen, workplace or the great outdoors.  What is fairly uncommon however, is someone who knows how to keep their knife sharp and how to discern what “sharp” really is. Hopefully this article will help to divulge a few secrets to the mystery that is making and keeping a knife sharp.

While there are extreme lengths one can go to in chasing the ultimate sharp edge on their EDC, this tutorial will teach you how to keep a good working edge on most any cutlery.

There are a few steps to this system, but with some practice, care and attention being paid; anybody should be able to effectively sharpen their knives using this method with very little invested for the results achieved.  The system is comprised of the following steps.

Discerning what damage has occurred to the edge is a revealing first step.  Looking at the knife edge from both the side, and head on will show what kinds of damage has happened.

When looked at from the side you can see small breaks in the line that makes up the very edge of the knife, these are either rolls, or chips… both of which you will be removing. The depth of the chips taken out of the blade will indicate how much metal along the entire edge you will have to remove to keep the same general shape of your knife.

Also looking at how thick behind the edge itself your knife is would be a good idea at this time, if your blade has been binding a lot in material after a few sharpenings and isn’t cutting as effortlessly as it once used to then chances are it needs a bit of thinning out behind the edge.

The very first step is called de-stressing the edge.  The steel at the edge of your dull knife is weak and essentially ruined from the abuse it’s received over time.  It’s important to get rid of this damaged steel in order to reveal the fresher, stronger steel that lies beneath.

To do this you must take the knife and draw it through your sharpening stone which will blunt the edge, as well as expose good steel. Hold the edge perpendicular to the stone when doing this and use very, very light pressure.

This next step involves finding what angles to sharpen at if you don’t have any specific tools for doing so. You can test how thick or thin your knife needs to be based on your own use and how it ends up after you initially sharpen it, but for now let’s start at 15 degrees per side.

How do you measure 15 degrees?  Take a piece of paper, each corner is a 90 degree angle, if you fold that angle at the corner in to thirds you will have a wedge that is a total of 30 degrees. Half of that is 15 degrees. This will be the angle you want to hold your knife against the stone while thinning out behind the edge and creating a bevel.

Use the sharpening stone

To start begin abrading the full length of the edge along a coarse stone (about 220-350 grit is probably fine) which is relatively flat. I recommend doing an even amount of strokes on each side if the bevels are already equal, otherwise you will have to use your better judgment as to how much steel must be removed to make the bevels equal.

Start out by making sweeping strokes using as much surface area of the stone as possible and working in sections as necessary, making sure to maintain the same angles even at the tip, and making sure not to let the tip of the knife slide off of the stone, this can cause rounding or even chipping of the tip of the blade.  Relatively light pressure is all you should need, with the stone doing much of the work.

Eventually you’ll know when to stop at this stage on both sides before creating a “burr”, but for now just abrade material until on the other side of the blade there is a tiny burr developed. 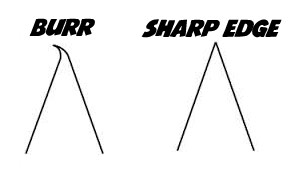 A burr is a thin strip of abraded metal which accumulates on the side of the blade opposite the one you’ve been grinding on. You can generally slide your fingernail off the edge and the burr will scratch your nail. Once the burr is created on one side, drag the knife through a piece of wood a few times to knock the burr off or reduce it, and then ensure the same is accomplished on the other side (developing and removing a burr).

Generally a burr is inevitable but as you improve your skills you should be able to get to the point where you’re creating only a super fine burr which you can’t really see or feel.  In creating a sizable burr and removing it, the metal on the very edge of the knife may be pretty sharp, but also extremely weak. This metal has been stressed by being bent back and forth as well as having the burr ripped off. The steel on the edge has fallen victim to the same properties that occur when you bend a spoon back and forth many times, the metal weakens until it just breaks.   At that point you’d have to de-stress the edge yet again to get rid of this weaker steel and you’re basically back to where you started.

Now you should have a primary edge bevel with which to work. You can raise the grit of stones and do higher polishes if you wish from here. 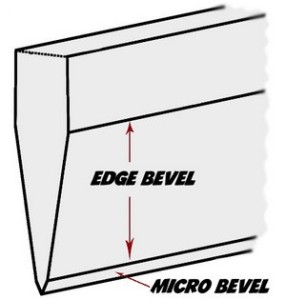 Once the primary edge bevel has been created, you will have to apply a micro bevel. This is the part of the “edge” that is doing the actual cutting. The bevel portion is just there to be thin and look pretty.  The micro bevel will also serve to remove any fine burr still left over from the previous step.

To apply the micro bevel to the primary edge you’ve already created, take one of the more coarse stones you’d used when making the edge bevel, and begin with that.

Using strokes across the whole if not most of the blade, make edge leading strokes at a slightly higher angle than the one you’d used to create your edge bevel.  This marginally wider edge makes for a stronger cutting edge, thus increasing overall edge retention.

For most people 20 degrees is ideal, but just raising the spine of the blade a hair above that angle guide made in earlier step works just fine. 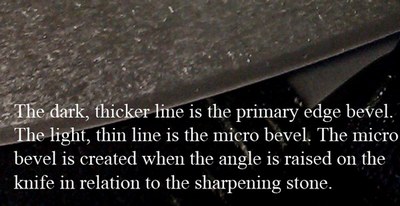 Making alternating strokes keep the edge of the blade as perpendicular to the movement you make across the stone, so the scratch pattern goes perpendicular to the orientation of the edge itself, if not turned towards the handle a bit, this will leave an edge which will cut better in tasks where the knife is slicing in a pull cut, which is most common.  Super light strokes here folks!

After a good amount of alternating strokes you should feel an edge developed, keep checking and making lighter and lighter strokes, and increasing the fineness of the stones you’re using if possible. After this step you should have a pretty nice working edge, but you can take it a bit finer if you’d like.

Stropping an edge is generally the final step, it will hone (and sometimes sharpen if you use abrasives on your strop) an edge and align the teeth created by the scratches from the stone this can be done with a piece of flat cardboard, newspaper, blue jeans, or commonly a leather belt (though using a proper strop is recommended if available). 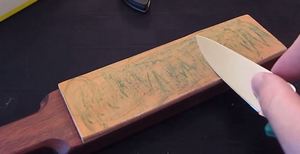 Instead of using edge leading strokes as though you’re trying to shave off a piece of whatever you’re doing them to (the sharpening stones) instead you will drag the edge backwards over the strop, alternating sides with each stroke and using a light touch, this will leave the edge performing just a little better than it did before, with a higher level of keenness.

If you’d like to take it a step further, you can apply any number of abrasives to your “strop” and they will refine the edge even further, while it’s generally not necessary for most every day cutting tasks, it can be fun to see just how far you can take your edge sharpness. Experiment with varying abrasives on your strop and see what works best for you and the knives you have.

With technique and patience you’ll be able to produce insanely sharp blades.

After a while your knife will go dull once again.  I don’t care if you have the best premium steels out there, it’s just going to happen eventually.  Depending on how far you let it go, it will either need a light touch up, or totally re-doing the whole process again.

In general I recommend most average users maintain the 15 degree per side edge bevel, but if you’re finding your edges aren’t going dull at all, you can actually just keep the 15 degrees per side bevel and strop that next time, just keeping it thinned out instead of making a micro bevel. This will improve performance by a huge degree, but will leave an edge which may not last as long.

Conversely, if you find your edge is going dull faster than you’d like, raising the angle a bit more when putting on a micro bevel should help remedy this situation. Either way, unless your blade is really beat up, you should be able to maintain your knives without thinning them out again for a reasonable amount of time, and just putting on a micro bevel and stropping the blade. Once the knife isn’t cutting very well, just repeat all the steps over again and you’ll be back in business.

So what equipment do I recommend?  Well, first thing to point out is that success with sharpening is probably about 80% technique and only 20% tools.  With that said, here’s my advice.

In terms of the abrasives, I recommend DMT Sharpeners which simply work the best on every type of steel in the general sense.  They are the hardest material and will even cut the carbides of a steel, allowing for the new super steels to hold an even sharper edge than previously thought when sharpening them on natural stones.

Natural stones like Arkansas stones are nice and work well on more basic steels, but on super steels with high carbides they simply stress the metal surrounding the carbides more than they should and cause them to fall out of the steel matrix.

Japanese water stones are nice for making edge bevels, but for the edge itself the slurry they can build will leave a rounded and blunt edge when using an edge leading stroke.  This is why I recommend making the edge bevel with exclusively edge trailing strokes on this type of stone.

The Spyderco Sharpmaker (Amazon) is really nice for keeping up on maintenance of a knife’s micro bevel, but for heavy work such as thinning out a blade consider the DMT sharpener.  With the optional diamond rods the Sharpmaker system becomes much more versatile, especially when lots of material needs removal.