The Spyderco Squeak is a small, non-locking knife with a slip joint, one of Spyderco’s SLIPIT line of folders alongside the Pingo and UKPK designs.  These unique offerings from Spyderco are designed primarily for carry in places where the use of a knife with a locking blade is prohibited.  Our friends in the UK know exactly what I’m talking about.

The Squeak is designed by Sal Glesser (founder of Spyderco) and produced in Maniago Italy, a small town well known and respected for their blades and craftsmanship. Generally the Italian manufactered Spydercos are done by the same people who do Lionsteel and Fox knives, both excellent companies.

The 2 inch blade is actually pretty stout for its size, at 1/8″ thick it has a distal taper to the point and is fully flat ground. The knife has very little resistance making cuts due to the full flat grind and with N690Co rust is almost not a concern whatsoever. 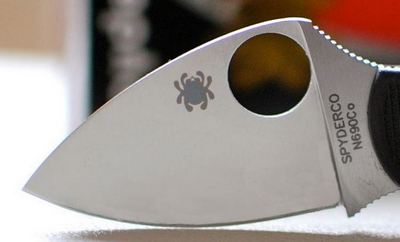 N690Co steel (often seen as just N690) is essentially Bohler’s version of the popular Japanese VG-10 steel but with increased levels of chromium which improves edge retention.  The addition of cobalt and carbon promote a high hardness which makes this a very decent steel indeed.   Many also compare it to 440C which also excellent in the corrosion resistance department.

As far as taking and keeping an edge, Spyderco generally sets most of their knives up with a 15 degree per side primary edge bevel with a 20 degree per side micro bevel to go with the Sharpmaker, this is true of the Squeak as well.

Mine came a bit uneven, but nothing to return the knife over. The finger choil, which is comprised of part of the blade and part of the handle, makes this knife impossible to close while you’re using it, a very thoughtful design aspect for a knife which doesn’t lock.

The FRN handle integrates with a choil on the blade allowing a full 4 finger grip for someone with small-medium sized hands, with absolutely no hot spots. The FRN handle is about 5/8″ thick in total and feels very robust for such a small package, it’s actually thicker than the Spyderco Dragonfly by nearly half its thickness.  Oh, and listen up ladies or gents looking for gift ideas…the squeak also comes in pink!

The wire deep-carry pocket clip is extremely well designed with just the perfect amount of tension to provide security and ease of mind knowing that it will stay in your pocket. While the texture on the handle provides a refined yet assured grip which is not so rough that it will mar your pants pocket. The wire clip only allows for tip up carry, which I prefer anyway, but does allow for interchanging between left and right sides.

One thing Spyderco always gets right almost every time is how well their knives meld with the user’s hand and the Squeak is absolutely no exception. For a person with average sized hands it fits absolutely perfectly, with a little wiggle room for a gloved hand. When closed in pocket the extreme light weight leaves your pants hanging as though there was nothing hanging off the pocket whatsoever.

The wire clip the knife comes with has just the right amount of tension to keep the knife in the pocket, but not so much that removal is difficult at all. Holding the knife in a large variety of positions is no problem and I have a hard time finding any practical grip which this knife fails to perform admirably in.

This knife deploys utilizing Spyderco’s patented hole, allowing for easy one handed opening even with gloved hands. Of course there’s no real “lockup” to speak of with this knife – it doesn’t lock.  But that’s the whole point of these SLIPIT knives.  While being a slip joint, the knife opens and closes easily with one hand without the fingers needing to get in the way of the blade while it’s closing, a fantastic design in my opinion.

The action opening and closing is extremely smooth, with two clicks opening it one at halfway, one when fully open. Sure, the knife doesn’t lock but it stays open and while I’m using it I have got total confidence that the blade won’t close on me unless I want it to. 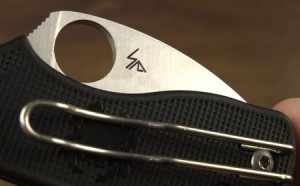 very aspect of the knife feels consistent in quality, from the satin finish on the blade to how the handle scales meet up with the back spring on the knife. The knife is extremely well manufactured for the 50 dollar price point.

Like its other contemporary tiny cousins like the Dragonfly and UKPK this is a little knife that feels and cuts like a big knife. The knife is so small and lightweight you’ll forget you have it on you until you need a knife, then low and behold the knife is right where you’d put it, on your pocket.

While using this knife for various tasks I find it is always conveniently accessible in pocket with no trouble extracting it from my pocket in the least, even with gloves on. The ease of opening with one hand makes deploying the blade within a couple of seconds of realizing it’s needed a task which is so easy I find myself not even needing to think about it. 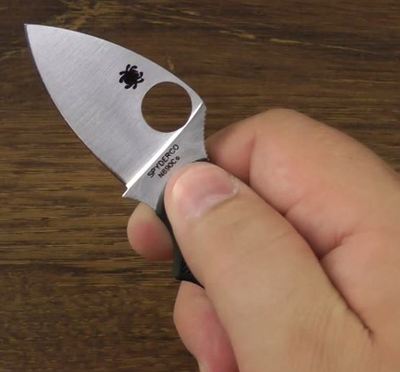 In regards to the slip-joint design and non-locking blade, I’ve actually not encountered any problems. The small utilitarian blade is perfect for most small/light tasks, and even some harder ones like cutting up heavy cardboard and things like that.

The slip joint snaps in to its open position with authority and is very assuring to the user when held in hand.  The fact that it doesn’t lock makes closing the knife back up with one hand a breeze as all it takes is a bit of pressure from your index finger on the spine of the blade to close it up.

The N690Co holds up quite well to a lot of work and abuse cutting cardboard, heavy plastic, bags and all sorts of other random materials and re-sharpening is extremely easy, with a regular kiss on the strop or a fine stone you’d be hard pressed to dull this blade beyond needing a quick touch up with responsible use. 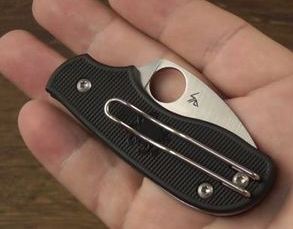 To be blunt, the competition for this kind of knife (a middle priced slip joint made for practical work) can almost exclusively be found from Spyderco with a few competitive offerings from other manufacturers, they have many knives in their micro line which are priced similarly and perform very admirably. A few of their slip-joint folders include the Pingo, and their line of UKPK knives, for a locking folder similar in style and size one needs to look no further than the Dragonfly, Cricket, and Chicago.

A few offerings from other brands would be a Boker’s War Toad or even many of Victorinox’s new knives offer reasonable pricing for one hand opening slip joint folders or if you’re looking for something similar in function but a bit more classic, there is always the classic Case Trapper, for a reasonably priced slip joint folding knife, though as far as contemporary non locking folders with a blade under 3 inches, Spyderco seems to be the competitor to beat.

Overall I’d suggest this knife to anyone who might use a knife but doesn’t want to either intimidate, scare, or offend anyone with the carry of a larger blade or locking blade. The convenience and ease of deployment/putting the knife away with just one hand make this knife a total winner in my book.  I guess good things do come in small packages 🙂

Spyderco reminds us why it's a leader in knife design with the non-intimidating Squeak.