Established Chinese manufacturer, WE Knife has been hard at work lately, creating an interesting array of well made knives with intriguing designs and marketing them right here in the USA.  Our impressions of this lesser known brand has thus far been pretty positive, as illustrated in our recent review of the WE Knife 610.  Today we got our hands on the WE Knife 608 which is in a class all of its own.

Buy @ BladeHQ
Again, it’s worth reiterating the fact that WE Knife Co. is a well-established company from China, having been around since late 1999. They are not new to the knife and tool making game, but they are relative newcomers to the North American market.

The specific model we tested was the 608I which is the blue-black-gold color scheme.  First thing that struck us was that the 608I was in stark contrast to the model 610H we had tested previously. Whereas the WE Knife 610 was industrial and utilitarian looking in design, the 608 was a flashier looking knife with larger overall dimensions, and bold colors on the 608 ‘I’ variation we had. The design cues and colors really popped out at us first. An almost matted blue anodization with gold anodized accents throughout the knife made for a striking appearance. 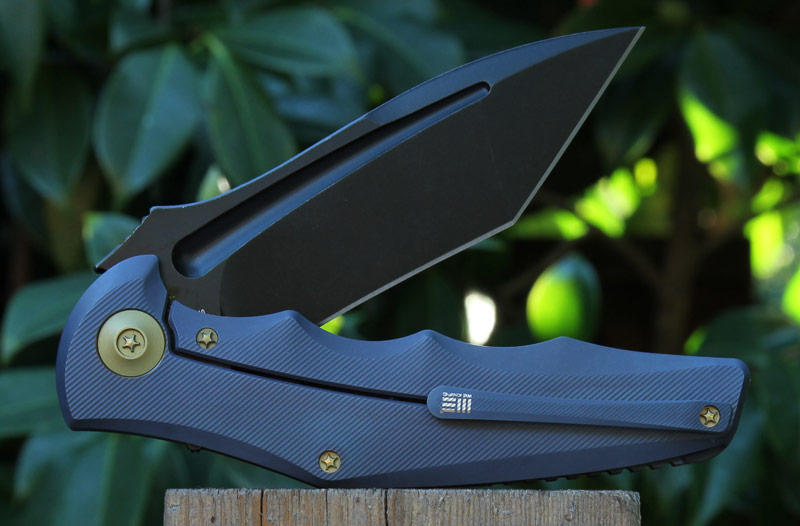 A milled sweeping line through the middle of the show-side scale was adorned with the gold color anodization and three cutout holes for cosmetic interest. Milled machined lines purposefully decorated both entire scales in a diagonal fashion for both aesthetic and tactile embellishment.  It reminded us a bit of some of the Reate products that employ similar machining and design practices.

The black tanto blade was tucked away, though we were able to see the black DLC coating that is not usually our cup of tea. It is likely that the coating is not actually DLC (diamond-like carbon) at all, but rather PVD (physical vapor deposition), or something similar. We immediately wondered how the coating would hold up. As it uses some great CPM-S35VN steel, we always tend to wonder why a coating treatment such as this is needed at all. I guess some people just like the look.  Either way the knife looked really nice and felt really nice with great contours to the hand. We will talk more on the feel and actual blade after some technical details to get out of the way.

The WE 608 felt solid, really solid. It is definitely aimed squarely at those who enjoy a larger knife with a tanto blade. We held the knife in our right hand and felt that it was very comfortable in a standard grip position. Then, we flipped open the knife blade for the first time. The feel of the flipper was excellent and the action was uber-smooth, as it should be with a ceramic ball bearing pivot and a decently sized 4 inch blade.

But that blade… oh goodness.  Did we already mention that tanto blades and DLC type coatings are not our bag? Beauty is indeed in the eye of the beholder, but to us this blade was not the prettiest thing we have ever seen. Though we loved the simple design of the 610’s blade shape, the 608 was very different. This blade was a very bold looking tanto with a large tip that would likely prove to serve well as a hard use EDC.

As for us, we felt the jimping on the blade, and it felt pretty good. It was a nice knife in hand. The frame-lock closing mechanism was well executed and very comfortable to use. The pocket clip was another interesting design choice and we’ve seen this clip design on a few other WE Knife offerings before. It is very thin in appearance as it uses 3-D milled titanium hardware to execute a truly unique and well thought out design. It felt close to the handle scale, and did not bother the hand when holding it firmly. 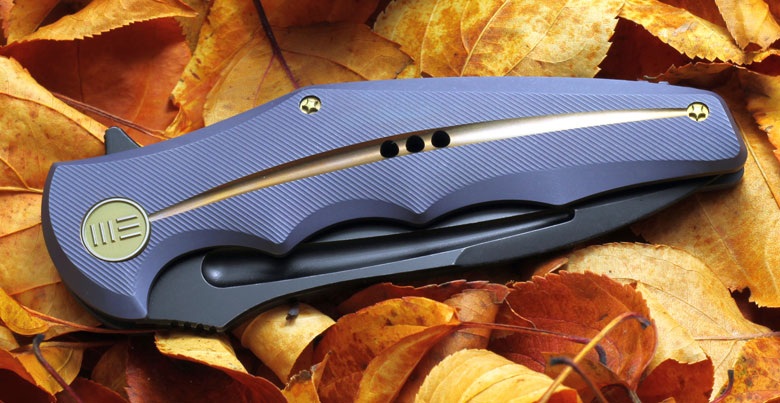 We should also state that the feel in hand was not only solid, but secure. Sure, the lockup was perfect at about 25 percent, and the blade centering was spot-on too. But we are seeing that becoming a standard among these top tier production knife manufacturers. What we do not always get consistently is a good feel in hand, and a secure grip that does not feel as if it will slip away when in use. The WE Knife 608 felt very well contoured to the hand, and offered a tactile grip thanks to the milled titanium lines/grooves so well machined. Even still, the knife was well sorted and smooth to the touch with no rough edges or abrasive areas at all.

After our incredibly positive experience with the WE Knife 610, we felt it less necessary to put any kind of big beating on the 608. Sure we carried it as our primary EDC for about 5 days, just a bit short of standard 1 to 2 week carry we often employ. We felt a shorter carry time was justified in this case given our extensive testing of the 608’s stablemate in our previous review.

During the time we carried it we performed standard EDC tasks such as opening letters, unboxing shipped goods, breaking down a few small boxes from purchase shipments, and opening some small children’s figures that seem to become more secure and tide down with plastic and rope with each passing month. We did not perform any gratuitous testing, or seek to try anything beyond the standard needs that the knife was called to use for during our carry time.

Ultimately, we enjoyed the knife, though we still are not the biggest fan of the blade shape or the size for our needs. The shape does a good job with standard tasks, but the cutting edge as it might be used for chopping is hampered by the large tanto sweep that funnels into a very sharp and thick point. The knife was however rather sharp. It cut well for the tasks we used it for, and seemed dependable. 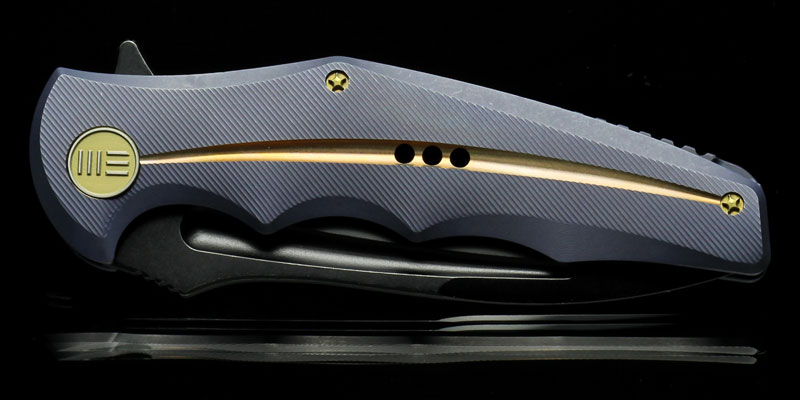 But as we have seen with other blades with black coatings, the black on the blade started to show wear and use. We noticed this most when cutting a few small package boxes open. Though we were able to clean and mostly remove the rubbing marks on the blade, it seems like rub marks and perhaps eventual erosion of the coating would occur with consistent use.  Some people like that look. We however are not fans of it here.

Here’s a few alternatives you may want to consider before taking the plunge on the WE Knife 608.

Reate District 9 Storm B – The District 9 was perhaps the first popularized product Reate put forth as they attempted to navigate the North American waters and enter the knife game. It entered with a splash. This overbuild all titanium design flipper well executed at under 200 dollars. Today, newer variants of the Reate District 9 are available. The Storm B has a stonewashed titanium scale finish and truly utilitarian get it done look that is strikingly simple but poignant in appearance.  The tanto style blade it offered was a bit less dramatic when compared to the WE Knife. As for which is the better flipper? We would say it is subjective. They are both very good, though the WE Knife 608 is a bit more refined in design style. If you can find any District 9 or variant of the name, it is a very good cross-shopping comparison to the WE Knife.

Kizer Ki401T V3 – Kizer is another Chinese manufacturer and maker that has already made some serious moves into the North American knife and tool market. Not one for simple model numbers or creative names, the Kizer Ki401T V3 is another expression of a tanto style knife. With S35VN steel, and a 3.58” blade, this knife is a bit smaller and less substantial than the WE Knife 608. It also has a much lighter detent, perhaps to a fault. But at about 185 dollars or less depending on where you grab one, it might be a nice piece for some in the EDC tanto market.

Zero Tolerance 0620CF – This ZT is an American tanto style blade with carbon fiber and titanium handle scales. Though not a flipper, it employs a thumb-disk and Emerson style wave feature to open the knife. Designed more for protective carry, this piece is a very well executed made-in-America alternative. At about 200 to 240 dollars depending on where you shop, the ZT might be a very nice option for those tanto lovers out there.

WE Knife Co. have really proven themselves in our eyes. Sure, they are already a big company, but with so many new companies making what look like solid production pieces, it is refreshing to know that we can test and verify that they are the real deal. The 608 has several model type variations ranging from color to blade type. It is not hard to find the type of version that would best fit your wants and needs.

At about 295 dollars, the WE Knife 608 is a very competitive offering from an extremely impressive knife manufacturer. It is not cheap, but it does not pretend to be. You will get what you pay for. Do yourself a favor, check these guys out before they become even more popular and start raising prices.

Yet another beautiful offering from WE Knife which performs admirably and won't break the bank like other mid-techs can.