Microtech Knives is a brand acclaimed for high tolerance levels in construction, high quality parts, and non-conformist design aesthetics. Many consider the production line-up of Microtech Knives to be automatic OTF (out-the-front) abundant, with manual folders following behind slightly in mass recognition.

With a past record of production and design collaborations with other famous knife makers, Microtech is truly regarded as one of the premier knife manufactures in the USA, and is also considered one of the best in the world.

This privately held company is steered by Tony Marfione, a very reputed custom knife maker in his own right. In fact, many of the production model designs include design elements similar to those found in his custom models, and even offer productionized versions of his custom pieces.

Founded in 1994 in Vevo Beach, Florida, the company relocating to Branford back in 2005, they moved again in 2009 and now conduct business operations and manufacturing in Fletcher, North Carolina.

Microtech has designed knives for use by the United States Military. Some of these knives have made it to the production world with consumer success. These models include the Halo, UDT, Socom, and Ultratech models.

Custom knifemakers have been quoted to say that the tolerances that Microtech is able to conform to during production are what make the factory knives so close to the custom design: “It has the same quality as a handmade custom” remarked Greg Lightfoot, another well-known custom knife maker, and occasional collaborator with Tony Marfione of Microtech Knives.

The Man behind the Brand – Tony Marfione 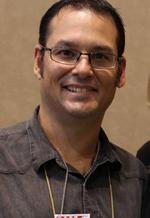 In many ways Microtech is Tony Marfione, and Tony Marfione is Microtech.  From an observer’s perspective, Microtech seems to have created such a high level brand status and sales channel that are actually in opposition to the desires of Tony himself. Microtech continues to operate in a manner that shows it wants to be a small manufacturer, but reluctantly doubles as a juggernaut in the knife industry.

Tony Marfione is a man that many regard as one of the top custom makers in the world, and a person who has garnered respect from other knife makers in the cutlery community. He is well known for his high mirror polished finishes, and fantastic ability to sharpen and finish a knife edge on a belt sander extremely accurately and quickly. As a custom maker, his reputation with regard to his craft is undeniably of the highest regard; perhaps strangely, Microtech as a company has not always been seen in the same light as the man behind the company.

Microtech Knives have a reputation for quality, but in the unlikely event that an issue arises, some vocal consumers have claimed support related issues. Though this is unsubstantiated, the rumor took-off like wild fire and claims of poor support from Microtech became coming conversation among pocket knife enthusiasts. We reiterate that these were merely claims about past experiences, and the support level of Microtech today may be at a very high level in the event that issues or questions come up during ownership.

The true controversy around Microtech knives occurred during the release of the Microtech knife called the ‘Matrix’. This knife was, and still is a very sought after item that had a short and limited release around the same time that Zero Tolerance produced their ‘0777’ model (often referred to as the triple-seven).  It is commonplace for two manufacturers who are in the same field and targeting similar demographics to produce similar products. However, in the case of the Matrix and the ZT 0777 something was a bit off. Both the similarity in design, along with the blade shape, sub-frame lock style locking mechanism, and 3D contoured ultralight Carbon Fiber handle made this a very strange thing.

Stories about how one company stole the designs, copied, and purposely produced the same type of knife were prevalent for some time – Each company defending their own position that they were solely responsible for creating the design. The end of the story is a little unclear to the public, and sadly we are no more informed than most everyone else on this matter. What we are aware of is that Microtech as a company stopped producing the full size Matrix model, and Zero Tolerance continued to make the model in a few incarnations of production (ironically all however where plagued with production issues and delays). Microtech did continue to offer mini versions of the Matrix with Aluminum handles, and Tony Marfione himself offers custom versions of the Matrix model in a variety of materials.

It is a strange story that both highlighted Microtech as a company, and created publicity for the company… though in retrospect it is perhaps unclear whether the publicity was indeed bad, or perhaps ultimately good.

Though Microtech continues to offer folding manual opening knives, none have created the buzz or appeal that the original ‘Matrix’ model has.  All that really means for consumers is that it is likely the team at Microtech is ready to provide us something special soon. On the other hand, the automatic pocket knives that are produced by Microtech continue to have a cult like following, and are considered the epitome of that knife type.

Microtech produces knives available for purchase through many different outlets. They have a rather large reseller and distribution channel which offers a wide array of knives available from Microtech. The following list provides information on the available models, sectioned by type.

Microtech Knives has earned its reputation as a top tier production knife manufacturer for good reason. Production models such as the Halo and Ultratech, along with the Socom Delta and Socom Elite are some of the most well-made and well-priced high end pocket knives any manufactures ever produced.

Tony Marfione and others whom have contributed directly to the organizations success are owed some serious appreciation from us fans and consumers. We can truly thank Microtech for creating inspiring products that allow folks like us to feel prepared in combat, and in suburban commando style settings alike.