After reviewing a long list of EDC knives it’s nice every now and again to check out something different…and boy is the Cold Steel Spartan just that.  You want a knife that stands out from the crowd?  Look no further my friends…

This bad boy looks meaner than drill Sgt. Hartman and tougher than a beaver’s teeth.  Sure the Spartan has some definite advantages over the competition but make no mistake, this blade is not suitable for everyday carry.

Buy @ AmazonBuy @ BladeHQ
Cold Steel was founded in 1980, and has been dedicated to making the strongest, sharpest knives in the industry ever since. Cold Steel has made a number of innovations that have helped to define the knife industry as a whole, including such advances as the Tri-Ad Lock locking mechanism.  I’m starting to like this company more and more as I have the opportunity to check out some of their latest folding knives.

The blade on the Spartan is a whopping 4.5” long (one of the longest in our knife comparison table), 4mm thick and the knife has an overall length of 10.5” when fully deployed.  That’s a beast!  The handle is 6” long and made of grivory (very similar to Zytel but a bit harder) with stainless steel liners. There’s no denying this is a big, heavy knife, weighing in at 7.5 ounces.

While I found the Spartan to be surprisingly easy to carry I’m reminded constantly of its macho physique and general purpose in life.  This is no all-purpose utility knife you’d use at home or work.  I think it’s best placed for outdoor/camping use or really anything that calls for something as heavy duty as this.

I actually had the opportunity to take the Spartan with me on a couple of hunting trips that worked out pretty well.   I’ve used the blade to field dress several bucks, turkeys, squirrels, and other game, and I’ve found that as long as it is properly sharpened, it will cut through fur, skin, bone and sinew with surprising ease.  I think you get the picture by now but I would definitely reiterate that this knife is more suited as a “hard use” knife than an EDC.

At camp, I found that the shape of the blade is great for “chef’s duties”.  I used it to slice tomatoes, chop onions and green peppers, and even cut steak. When the blade is sharp, it’s very sharp and will slice through just about anything you want to tackle with it. The only downside to the blade is the lack of jimping and the fact that the thumb plate feels a bit awkward when you need to choke up on the blade. Also, some users have reported a poor finish on their knives, noting evidence of rust early on. I cannot say that I have noticed that myself even though I’ve used the knife in both snowy and rainy conditions.

The blade on the original Cold Steel Spartan was forged from Japanese AUS 8A Stainless Steel (almost identical to AUS-8). As many of you know, this steel is not quite as high quality as many of the “super steels,” but it is still an excellent midrange steel. This type of steel sharpens easily and holds an edge fairly well, as long as you are happy with not having the razor-sharpness for very long. Additionally, AUS 8A is extremely corrosion resistant.  Recently Cold Steel is now offering the Spartan in American CTS-BD1 steel, which is very similar to AUS-8.

This wicked-looking blade is designed after the ancient Greek “Kopis” swords but it’s basically a drop-point blade with a very large recurve.  As I mentioned earlier, the blade holds an edge well and can be sharpened razor sharp, but do note that the recurve of the blade certainly adds some additional effort to the sharpening process. You have to really watch your angles as you work along the recurve. The good news is that the blade has a reinforced blade and a high hollow grind beginning, which makes it terrific for penetration and slicing. 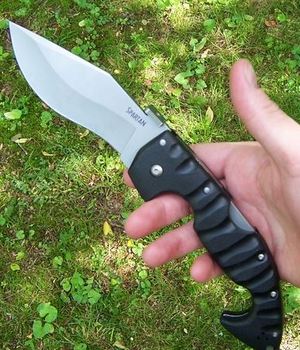 The knife’s handle is made from a hard plastic called grivory which wraps around your hand to improve your grip on the knife.  I’ve rarely used a knife before which feels as secure in your hand as this one.  The scales have a tiger-stripe textured pattern machined into them, which makes the knife look even meaner than it already does while also improving the grip on the knife. The tough grivory plastic for sure makes the Cold Steel Spartan a very heavy-duty, durable knife suitable to last under extremely heavy usage.

I noticed the Spartan’s stainless steel liners aren’t milled but very flush with the scales and the blade moves nicely in and out without any vertical or horizontal play at all.  I really wish the liners were milled out a bit, since that would improve the weight substantially. If the knife were lighter I feel it would open up a whole other degree of practical applications.

The Spartan features a thumb plate for opening which can be used just like a regular thumb stud or use it to “wave” the knife open as you pull it from your pocket. Unfortunately, the pocket clip causes the knife to ride very low in the pocket, which makes it difficult to open the knife using the “wave” motion. Next, I found the spring on the knife, unfortunately, is a bit too strong (as had some other reviewers I should point out).  The strength of the spring, coupled with the long length of the blade, make it a bit difficult to deploy the knife single-handedly in my opinion.

The locking mechanism used is Cold Steel’s patented Tri-Ad locking mechanism, which has to be one of the strongest out in the market today. It’s strong….very strong and perhaps even a bit too strong – I usually have to struggle a bit to unlock and close the knife. I thought at first that it was just me, but evidently this is one of the most common complaints about the Spartan.

Finally, the pocket clip on the Cold Steel Spartan is stainless steel, and the knife actually includes two pocket clips that are reversible for either right- or left-handed carry. The knife rides very low in the pocket, which is a bonus for concealed carry. I found the clips very strong, but still loose enough to enable me to easily and quickly draw the knife when I need to.

All in all, the Cold Steel Spartan is an excellent knife for heavy-duty usage. It holds a decently sharp edge pretty well, even though you’ll find will not maintain the hair-shaving razor sharpness for very long. Still, it sharpens easily, once you get past the tediousness of working along the recurve blade. The knife is extremely sturdy and durable and is well suited to heavy usage as you’d expect.

Check out this video of the guys at Cold Steel really giving this knife a beating.  Quite impressive!

Now, I’ll say it one more time – it’s not suited for EDC, but it is definitely useful for hunting, camping or any other heavy-usage outdoor setting.  If nothing else, it would also make an excellent conversation piece, since it has such a distinctively impressive and mean-looking appearance. I might not use my Spartan every day, but it was definitely a good addition to my collection and probably yours too.

While not for everybody, the hefty Spartan serves very well as a workhorse knife.