Today I’m reviewing the compact fixed blade Banshee D2 skeletonized knife which was sent to me by the good folks over at Ghost Knives.  It’s not often I get to review fixed blades so I’m excited to stray from the world of folding knives to bring you this review.  Rest assured I’ll review more fixed blades in the future.

Buy @ AmazonBuy @ BladeHQ
Ghost Knives is a relatively new knife company based here in the USA, founded in 2013 by two engineers who worked on various military projects.  These folks have plenty of experience in hunting, fishing and general survival but also a working knowledge of metallurgy and fabrication which led to the creation of Ghost Knives.

With so many production knives being outsourced offshore in places like China and Taiwan it’s refreshing to see a company like this proving that it’s still possible to create quality knives at reasonable prices right here in the USA.  When you can do it through sustainable practices it’s even more impressive.

The Banshee D2 is a fixed blade knife with skeletonized handle intended to be bound in paracord.  It measures just over 6 inches long with a blade length of almost 2.5 inches.  Excluding the included Kydex sheath the Banshee weighs in at only 1.8 ounces and the sheath adds about another ounce.  Overall, I found the knife to be a bit on the small size for my tastes but I get that this is by design.  This is not intended to replace your machete, but instead serves as a tremendously versatile light-carry blade.

Now, many of you will have noticed that this design is nothing new.  In fact, the Banshee D2 is very similar indeed to the ESEE Izula which is about the same overall length but with a slightly longer blade and also the KA-BAR BK14 and the larger BK24. I have not personally used those knives but it’s clear they are very similar in design and function.  More on those later.

The Banshee’s blade is a full flat ground, drop point design made from D2 steel.  If you’re familiar with our guide to knife steels you’ll know that D2 is a tool steel that’s extremely hard and as result comes with excellent edge retention properties.  In fact, it is only ousted by pricey super steels like Elmax, M390 and S90V in the edge retention department.   I’m not sure what kind of hardness the folks at Ghost Knives were able to achieve with this D2 but it sure feels solid and stood up to plenty of abuse.

As you’d expect, with this level of hardness comes the realization that sharpening this bad boy is not going to be a walk in the park.  Fortunately, you should get a fair amount of usage before the time comes when you’ll need to book a lengthy date with your Sharpmaker.

Ghost Knives has done a nice job of ensuring the blade is sharp out of the box.  It’s not what I call Spyderco sharp but certainly good enough for most.

Where D2 steel fairs somewhat poorly is in the corrosion resistance department.  It’s not terrible but the risk of rusting is going to be a little higher than most other steels in this segment.  On the plus side, the entire knife is coated with an abrasion resistant ceramic known as Cerakote.  This resists rust particularly well and is also highly impact resistant.   So, assuming the Cerakote holds up you really only have to worry about keeping the blade edge away from prolonged exposure to moisture.

The handle on the Banshee is a simple skeletonized loop that’s intended to be wrapped in paracord.  Besides providing a nice grip on the knife, the paracord serves as a survival aid in emergency situations where it can be removed and used in a multitude of ways.

It’s nice to see that Ghost Knives included a six foot length of black paracord to get you started.  Sure, many will want to spice things up with their own colors but I’m more than happy with the simple black. 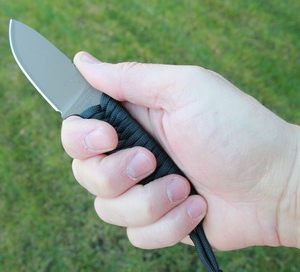 I wouldn’t recommend using the knife bare…get the paracord on as soon as you can.  If you’re not sure how to wrap your Banshee with paracord check out this video from Gideon’s Tactical.

In terms of ergonomics I was pretty impressed by the Banshee.   As I mentioned earlier I found the knife to be a little on the small side but was able to make cuts with little resistance.  The balance is pretty good and the jimping found on the spine does help quite a bit.

I find jimping to be crucial on most smaller blades where you need to choke up for close cutting tasks.  The jimping here is well done and allows your thumb to really lock in place while cutting.

Rest assured, for a small blade you can still get effective cuts with this knife. 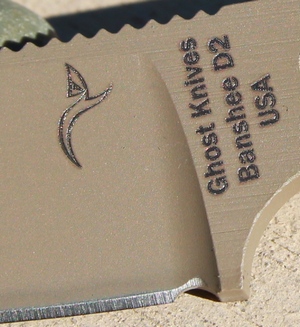 Fit and finish is generally good all the way from the blade edge right through to the laser etched markings on the base of the blade.  They haven’t skimped on anything here folks.

The Banshee comes with a sheath made from Kydex, a scratch resistant thermoplastic that’s insanely tough.  Kydex is pretty popular when it comes to knife sheaths – it’s waterproof and won’t stretch or shrink.  Kudos to Ghost Knives for using a quality material like Kydex on the Banshee sheath.  The Kydex sheath is Tek-Lok and Molle-Lok compatible for attaching to belts, leg straps and webbing.

The blade slots effortlessly into the sheath and locks tightly in place with a satisfying ‘click’.  It takes a decent yank to remove the blade so you have peace of mind the blade won’t fall out on its own.

I didn’t get to use the Banshee D2 for an extended period of time prior to writing this review but I was able to get through the usual paper, cardboard and rope tests where the Banshee held up remarkably well.  This D2 is going to take some beating before it needs a tune up.

Ghost Knives lists the Banshee D2 on their website at $79.99 MSRP and you can also buy from Amazon at roughly the same price with shipping & handling.  In my opinion it’s perhaps $10-or-so more than it ought to be considering the KA-BAR BK24 and ESEE Izula retail between the $55 to $70 mark.  Still, when you consider the quality you’re getting and the fact this is made here in the US it all sounds reasonable.  I imagine the sale price will fluctuate somewhat from MSRP over time.

Overall the Banshee D2 offers a nice balance between weight, performance and functionality.   It’s 100% US made and comes with a lifetime warranty which is nice to see.   Backpackers who want something lightweight and practical should certainly consider the Banshee D2.

The Banshee D2 is a well made compact fixed blade knife with solid performance.