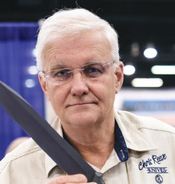 Chris Reeve is a South African knife maker who started his knife company (of the same name) back in January, 1984 in a town called Durban, S. Africa. Prior to starting his knife business Chris was a full-time Tool and Die maker, having only dabbled part time in knife making. His previous experience proved to be a perfect blend of knowledge and execution as Chris steadily built up his one person operation to the most well respected full production knife company on the planet.

Chris moved his operations from South Africa to Idaho, USA in 1989 and continued to produce knives with a reputation for extreme quality and tolerance levels.  Still thriving in business today and operating with a large crew and state of the art equipment, CRK continues to produce knives for users, and collectors who get excited simply by the name ‘Chris Reeve Knives’.

Throughout the years Chris Reeve Knives has created thousands of production pieces. Perhaps more interesting is that he has only had a handful of models in his line-up. With a focus on quality of quantity, Chris Reeve has mastered the art of refinement as his slogan of ‘measure twice, cut once’ is a take on the old carpenter’s catch phrase. It is with this mentality that Chris has been able to achieve success.

The Sebenza model, considered the most popular of his knives is the model that has received the most attention over the years (and for good reason). The Chris Reeve Sebenza (Large) is the one singular knife by which ALL other knives are judged and compared; with its titanium scales and high end stainless steel high hollow grind drop point blade making for an unmistakable appearance, the Sebenza is a timeless masterpiece.

This has effectively been the case since its popularity skyrocketed in the 1990’s. In addition to the large Sebenza which comes in large and small sizes, versions, and variations with a bevy of different adornments such as unique engravings, customized graphics and inlays.

Another well received product called the Umnumzaan by Chris Reeve has appealed to the more tactical minded. The Umnumzaan is a slightly more aggressive looking folder that has very similar dimensions compared to the large Sebenza, but includes some milled line texturing in the titanium, glass breaker, and a more tactical blade shape to make it altogether a different product from the Sebenza. Beyond just these two examples, every single model he creates and sells is of the highest quality, and it is for that reason so few models have been brought to market in wide release over his 30 plus year career.

The following models have been produced by Chris Reeve within the tenure of Chris Reeve Knives.

Influence on the Knife World

Chris Reeve and Chris Reeve Knives have undoubtedly had a tremendous impact on the knife community at large. Though it can be tough to differentiate the knife maker/owner from the company, in this case they are essentially one in the same.  All of the creations that Chris has forged have appeared in his production works. Additionally, Chris Reeve does not make custom knives in addition to his production models. Therefore all the work and innovations made, and there have been many trickled directly down into the creations you can purchase today. Some of the innovations that have influenced the knife community at large are:

Let’s discuss each one of these individually since they have molded the way we buy, use, and interact with cutlery of all types today.

Chris is regarded as the inventor of the Integral Lock mechanism, also referred to as the Frame Lock. This mechanism was essentially the progression of the Liner Lock, but offers additional advantages which allow for once handed open-close whether you are a righty or a lefty, natural additional strength on the lock-bar as you squeeze the knife durin
g usage minimizing lock failures, and a smoother open and close without the need for springs. This mechanism and design has effectively revolutionized the knife industry. It is a crowning achievement to an incredible career for Chris Reeve.

Chris Reeve has always prided himself on the use of premium materials for his production products. It is this along with his extreme tolerance levels that continue to make his products so immensely popular and appealing. Chris took this concept to the next level by working directly with Crucible Steel, a maker of some of the most high end powdered metallurgies in the world to refine and update the blade steel itself that would be available in his knives.

First he worked with them to produce CPM-S30V steel back in 2002 which became THE stainless steel for years. Years later, he collaborated with Crucible again transforming the CPM-S30V steel into a new and improved incarnation, while still allowing for a durable and serviceable steel product. The creation was called CPM-S35VN, with the “N” representing the key ingredient niobium.  Read more about it here on our knife steels page.

In the early 1990’s the idea of purchasing a 300 plus dollar production knife was unheard of. If you darned mention even the thought of such a thing it would have been the height of hubris.  But this has changed over the years and we have only one brand to thank (or hate) for that – Chris Reeve Knives.

Chris understood the importance of brand identity, luxury and exclusivity, and never price to value quotients. He produces high quality products and charges what he considers to be a fair wage based on the materials, design, effort, and brand identity. He effectively created a luxury brand in the genre of production knives and outdoor/luxury goods. This brand identity continues on today, along with other manufacturers making effort to attempt emulation of the very thing he created 20 years ago.

It is hard to describe why people are so compelled to all of Chris Reeve Knives without using the word “tolerance”. Before Chris came about, the idea of having a production knife with better tolerances that those used in the aerospace industry was completely unheard of.  “What would be the purpose or point “people would remark… well it turns out the point was pretty simple to understand after all. Creating the best possible product at any cost equaled a brand following and loyalty that has never before been seen in this industry, and has still yet to be replicated with such aplomb as we see with Chris Reeve Knives. Tolerances are all about quality, and that is what Chris Reeve Knives are meant to be.

Even since the 1980’s we can all remember knock-off items sold on the streets, whether they were hand backs, sneakers or watches branded Folex …But what about knives? Nope, they did not exist. Maybe you would find the occasional no-name knife from the flea market but certainly not a replica knife. Chris Reeve Knives almost single handedly became The replica knife made over night (thanks in part to our acquaintances in the East).

By around year 2003, you could get yourself a replica Chris Reeve Knife for about 50 dollars. This is truly amazing. The brand carried so much identity, and the style was so well regarded that people were making, selling, and buying 50 dollar plus fake knives during a time when 50 dollar production knives on average were already considered expensive. Chris Reeve Knives certainly did not have anything to do with making replicas, but they were a major unwitting contributor to the knock-off revolution that riddles the knife industry today.

Chris Reeve Knives is debatably the single most influential knife brand in the world.  His brand and his knives have a following that only be described as cult-like. Chis Reeve and his wife Anne Reeve have created a brand from the ground up that continues to push the boundaries of production knife manufacturing quality and performance. Often considered a hard use luxury brand, if only one knife existed on earth, most would wish that to be a Chris Reeve made knife.

This ‘made in the USA’ Company, proudly out of Idaho does not include a single flipper or automatic OTF in their entire product arsenal, and yet they remain a relevant leader in the industry. Chris and his perfectionistic and methodical nature may seem to some as old school, but the reality is that his knives are battle tested and history proven. If and perhaps when he creates another model, we can be assured it will be because it elevates the nature of the knife craft, not just because others are doing different things. Chris Reeve Knives – A true leader in production knife innovation within the cutlery industry.